Olympics!! (Oh, and a manicute too)

The XXXth Olympiad kicks off tonight in London with the Opening Ceremonies and I'm so excited! I'm a huge Olympics fan and have watched them as far back as I can remember, basically. One of my most vivid memories is watching Kristi Yamaguchi skate to gold in 1992. I even got to attend the Olympics last year in Vancouver (to watch women's figure skating) and it was incredible. I plan on being glued to my tv over the next two weeks.

For my manicure, I finally decided to do some real nail art and used the Olympic Rings as my inspiration. I painted the colors of the rings across my fingers and then used a gold striping brush to write 2012 on my four fingers. Originally, I wanted to write London on my thumb, but this proved to be too difficult for me, at least with the tools I had at my disposal. So I decided to pay tribute to the host country by painting the Union Jack on my thumb! This was my first attempt at "proper" nail art and I'm actually quite pleased with how it turned out! 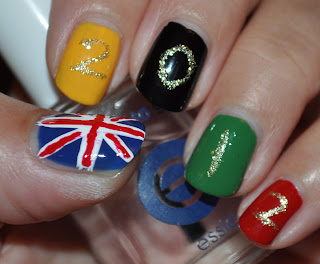 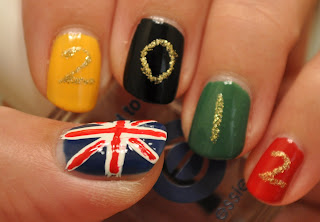 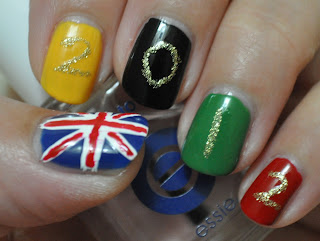 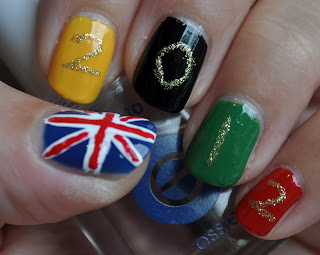 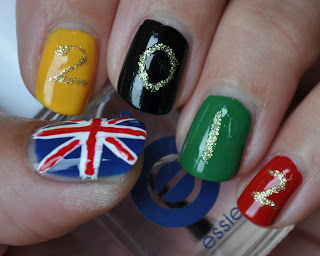 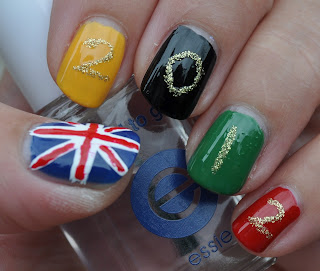 Here's a close up of the Union Jack on my thumb: 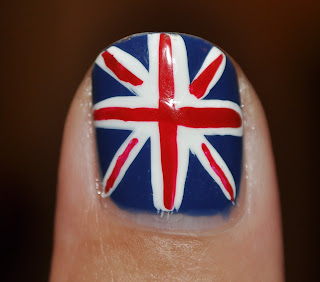 I needed a lot of polishes to make this happen:

Are you going to be watching the Olympics over the next two weeks? What are your favorite sports? Personally, I love swimming and gymnastics the most, but I will also watch diving, beach volleyball and some of the track and field events. I also like to try and watch something I haven't before-- I might try cycling this year, since I just read Gold by Chris Cleve.
Posted by Cat Ray at 5:49 PM