Now back to actual villains, today's polish, NerdLacquer Kylo, is the bad big fan from the newest film. I'm not sure how spoilery I should get, although probably if you actually cared about spoilers, you've probably already seen the movie, but I'll be careful (I get that it can be hard to see thing in a timely manner, believe me)! Anyway, Kylo Ren is one of the new villains in the new trilogy and spends a lot of time tromping around in all black and a mask, trying to emulate the late, unlamented Darth Vader. I think there was a lot of complaining in the fandom about Kylo not really being an effective villain, or being a lame retread, which I won't get into here: I think Kylo has a lot of potential and actually I found his rages to be quite scary so I hope he gets more complex as the newest trilogy moves forward.

Moving on to the polish, Kylo is described as a "glowy and menacing wicked blood red with flame and violet (violent?) shimmer and black microglitter." I like that this polish is red and not a predictable black (given that Kylo idolizes Darth Vader)-- I feel like the red captures Kylo Ren's rage, frustration and insecurity a lot better. Formula-wise, this was good! Nice consistency, not too thick or too thin, with a good distribution of glitter/shimmer and it went on easily and built up nicely. I used three coats. The shimmer adds so much depth to this polish, I love it! I especially love I can actually see the violet shimmer, as I feel like it could be overwhelmed by all the red. 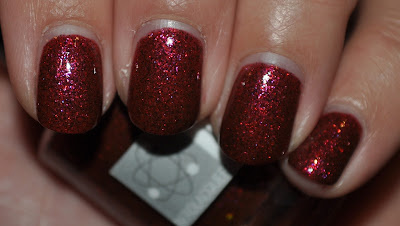 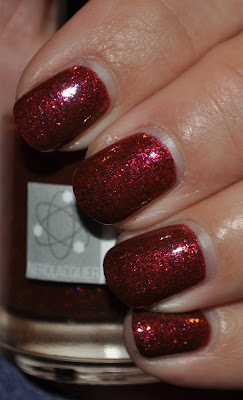 In the end, I like Kylo a lot better as a polish than the unfortunate Hocchhh Kssshhhhh from Monday, though overall Darth Vader still beats Kylo Ren out as a better villain; time will tell if Kylo really steps up to the plate as a villain. Hopefully, like his namesake polish here, he gets more depth and interest!