Yesterday we had blue, today we have green--the other dominant color of lightsabers in the Star Wars universe. As an aside, in the Expanded Universe (now Legends), there were a bunch of different lightsaber colors, spanning the whole rainbow, but in what is now considered "canon" we find that lightsabers are generally blue or green, which few exceptions. The Sith wield red ones and Ahsoka Tano in Rebels has white ones, signifying her neutral status, but that's pretty much it. Honestly, I think we've seen more characters in the movies using green sabers than blue: Qui-Gon, Yoda, Luke in ROTJ, even Anakin at one point during the prequels, and Ahsoka in Clone Wars. To name a few, anyway. With that potentially useless information expounded, let's focus on today's polish: Different Dimension Saber That. If you haven't guessed, this was yet another one (I'm up to four, with one remaining) of the polishes from the May 2015 A Box, Indied.

Saber That is a light but bright green polish that almost has a neon feel in some lights, but isn't actually neon (just bright). It has some shimmer and a soft holographic finish that I don't think I realized when I first wore this. Unfortunately, the formula was a bit difficult with this polish. It could be because of the glow in the dark aspect, or because it's been sitting around for awhile, or because it needed to be remixed slightly better but for whatever reason, it was on the thick side, and but was also prone to dragging. My first coat was pretty uneven, but I tried to use a light touch and as few strokes when applying it as possible to prevent any streaks after I applied it to a couple of nails. It did dry down fairly quickly, but I needed to use three coats to make sure it was even (though I tend to use three coats for most polishes anyway, so it wasn't exactly a hardship.) 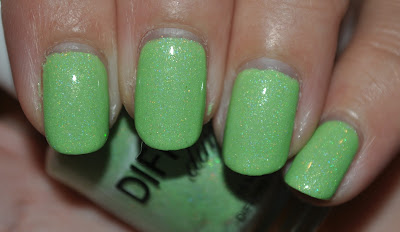 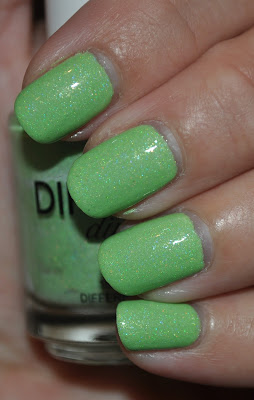 Despite the formula issues, I really like this! The color is pretty unique and I of course love that it glows in the dark! And it still works, a year later! Sadly, I was not able to photograph this in the dark-- whatever witchcraft Force power I used with Saber This! I have apparently lost because I could not for the life of me capture this! Needless to say, though, even after a year, Saber That still glows. I'm not sure if there's a shelf life on glow in the dark pigment (probably) but I'm happy to report it's still working as of now! And it glowed quite nicely too. Ah well. In the end, I actually think Saber That is my favorite of the two lightsaber colors (and who would have thought I would be saying that about a green polish?) because it's more unique and I love the shimmer and holographic qualities it has. I think I will pulling this out to wear regularly!