Now we're switching gears a bit-- Princess Leia took the first focus, given that she's one of my favorites (and conveniently, I have a bunch of polishes dedicated to her). But today we're switching gears to some polishes dedicated to light sabers, the signature weapon from the Star Wars galaxy, reverently referred to by Obi Wan Kenobi as "an elegant weapon from a more civilized age." (Not a direct quote, but you get the idea.


Today I have a polish that was initially part of the May 2015 A Box, Indied. It was one of two glow in the dark polishes in the box. Today I have Glisten & Glow Saber This! which is based on the very first light saber we ever see in the Star Wars universe, wielded by Luke-- though it was actually his father's light saber. Obi Wan Kenobi also wields a blue saber (and so due a bunch of other Jedi, as we see in the prequel trilogy-- it's one of the two main colors of light sabers we see). Saber This! is a bright blue with shimmer, and as I mentioned above, it glows in the dark. 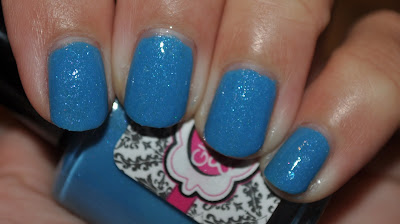 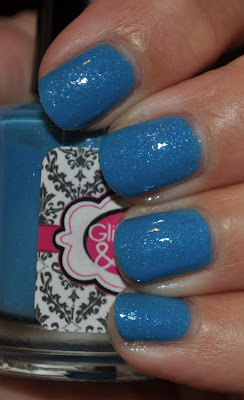 As I said, Saber This! is glow in the dark-- which I of course suck at photographing! But I did take some photos with my iPhone in an attempt to capture it. I don't have the greatest photos, but you can see it! The glow was stronger in person than I could accurately on my phone; sorry about that! 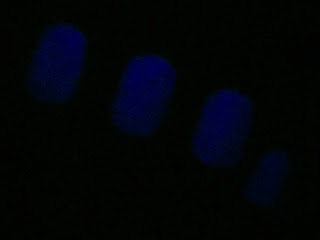 I really liked this polish! It was actually my first glow in the dark polish, and it was a lot of fun to see my nails in the dark. Plus the color is really fun and I love the shimmer!
Posted by Cat Ray at 6:00 AM

Email ThisBlogThis!Share to TwitterShare to FacebookShare to Pinterest
Labels: blue, glisten and glow, glow in the dark, shimmer, star wars