NerdLacquer But She's Got It Where It Counts

I debated put this polish in the famous Star Wars quotes section, but technically this quote is a little more obscure so I figured I would pair it with yesterday's Dollish Polish Millennium Falcon, because NerdLacquer But She's Got It Where It Counts comes from Han defending his ship to Luke, who is a bit dismayed when he sees it in A New Hope and calls her a piece of junk. (Though seriously, Luke?! You've never even left Tatooine so let's cool it with the judgements, mmkay?)

NerdLacquer But She's Got It Where It Counts is described as a "concrete grey with silver microshimmer, plus silver, white, charcoal and rust glitter." Despite having this polish for at least a year already and the fact that it's been sitting in a drawer for awhile, it was still pretty easy to use! I did give it a few good rolls and turn it upside down for a time to redistribute pigment and glitter, but didn't have any issues getting glitter out of the bottle. The formula wasn't too thick or too thin, there was nice glitter distribution and you could either do three thin coats or two thicker coats depending on the look you wanted. I ended up doing two coats because a) it covered pretty well and b) I was lazy and didn't want to do a third. I think it looks fine with two. 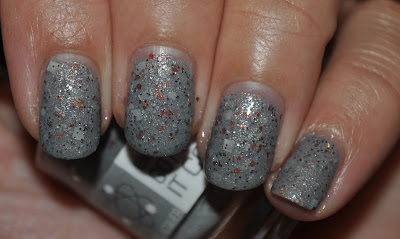 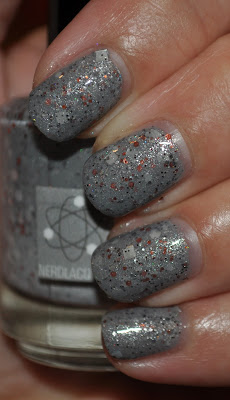 I felt like this polish needed to matted, because... it's based on a junky looking old spaceship. Of course it needs to be matted! But could I find a freaking bottle of matte topcoat? Hell no. (Hmmm I think this is why people organize their shit.) But finally I found my Zoya Matte Velvet topcoat and went to town. (Side note: I found a needed a couple coats of this to really matte it... also, you're only getting three fingers because I messed up my pinky!) 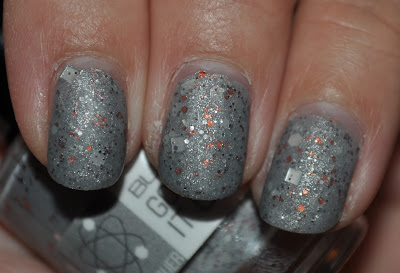 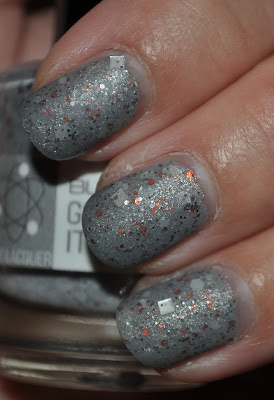 This is a funky combo of glitters but I think it really accurately captures the feeling of the Millennium Falcon. She may not the shiniest ship on the block, but she's unique and beautiful in her own way and that counts for a hell of a lot more!
Posted by Cat Ray at 6:00 AM