I guess technically I could have made this a Two-fer Tuesday but instead we get... Two-fer Thursday...? Roll with it! Today I have two polishes dedicated to one of the newer villains in the Star Wars universe-- a lady to boot! Level Up Lacquer Captain Phasma and Nerdlacquer Phasma are inspired by the eponymous lady storm trooper introduced in The Force Awakens, identifiable by her tall stature and shiny chrome armor. I believe she is the first female villain we've seen on the big screen. Unfortunately, her role wasn't that large, so hopefully she gets an expanded role and more depth in future movies.

Captain Phasma is described as a "silver/grey cream with a linear holo effect." I would say that in my experience, this polish definitely has a more jelly like consistency than what I would expect from a creme, so to be a smidge more descriptive, I would call it a stormy grey holographic jelly. The first coat was pretty sheer, and this had a slightly thicker consistency that made it want to drag. I used three coats to make it opaque, though it does still have a squishy appearance on the nail. 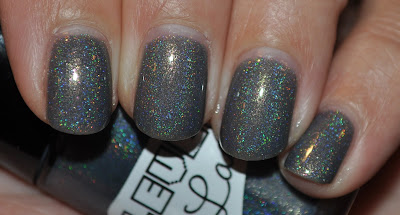 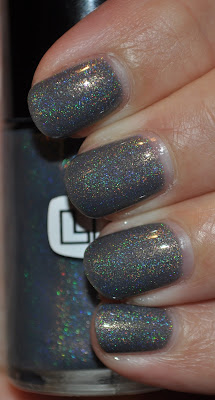 Phasma is described as "a 'chrome plus' which contains the usual foily chrome bits plus a crapload of silver, white, and holo microglitter, plus a dash of linear holo which doesn't really display to full effect, but does add a bit of opacity. As you see in the pics, this is like, the sparkliest silver nail
polish ever. Kinda demi-matte velvety-feeling on its own, but very glassy slick with topcoat." The first coat was fairly sheer, but easy to apply. It was a bit on thick side, but wasn't difficult. It dried down quickly to a matte finish and built up nicely. 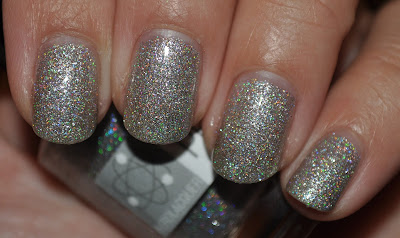 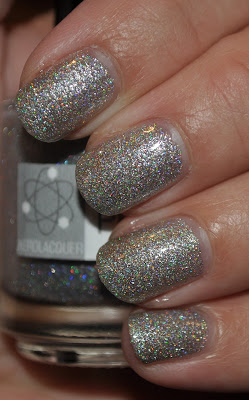 I like both of these! They are similar but not the same-- again, a lot of creativity from various indie makers! I like the darker, harder color of Captain Phasma and the intense sparkle from Phasma. No complaints here! As I said earlier, I hope Phasma gets an expanded role in future films; it's nice to have women in prominent positions on both sides (good or bad)!

Which one of these is your favorite?
Posted by Cat Ray at 6:00 AM