Darling Diva These Aren't The Droids You're Looking For

Ok, this technically could have gone in my famous Star Wars quotes section, buutttt it also makes the transition into my next little section: droids!! There are certain droids that have developed their own little personalities within the Star Wars universe and have become steadfast favorites of the fandom. In fact, R2-D2 and C-3PO in the original trilogy are pretty much our entry point into the universe until we meet up with Luke and they play critical roles throughout the series. To start off this week of droid inspired polishes, today I have Darling Diva There Aren't The Droids You're For, based off of R2-D2 and C-3PO and using Obi Wan Kenobi's memorable line from A New Hope.

I would describe These Aren’t The Droids You’re Looking For as a white crelly with blue, red, and gold glitter to represent our favorite droids. I probably should have turned this polish upside down before using it— it had been sitting for awhile and so some of the glitter was sticking the sides of the bottle. So it was a bit difficult to get some of the larger blue glitters out, but that probably would have been remedied if I had prepared better. Being a white crelly, the first coat was a bit sheer, but built up nicely. I did try to place a few glitters, but otherwise didn’t have any problems applying it. I used three coats to get the opacity I wanted. 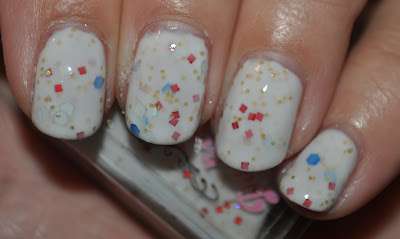 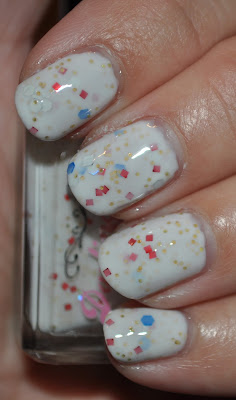 And how could I resist making it matte? 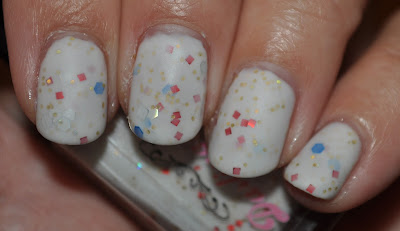 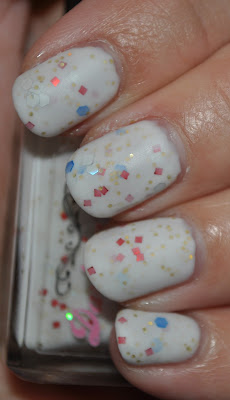 Love this polish! It’s really cute and I love how the colors represent the droids. It does need a bit of a shake-up prior to use, but was generally easy to apply. I continue to impressed with Darling Diva polishes, and These Aren't The Droids You're Looking For is no exception!
Posted by Cat Ray at 6:00 AM