Today's polish, Darling Diva Scruffy Looking Nerf Herder is technically only part of a quote, but it counts (or I'm counting it, anyway). It's the last part of a quote from Leia, who is describing Han as a "stuck-up... half-witted... scruffy looking nerf herder!" to which Han woundedly replies: "who's scruffy looking?" Classic. (This is another quote from ESB, which truly yielded some of the best lines in the original trilogy and series in general.)

Scruffy Looking Nerf Herder is described as a "complex brick red holo is full of sparkle and depth." As a brick red, there are definitely brown tones to this polish, and I think the balance is pretty even between the red and the brown (I feel like my photos lean slightly brown, but in real life I think the red is the more dominant tone). The formula was a breeze. Not too thick or too thin, and it applied easily without any issue. 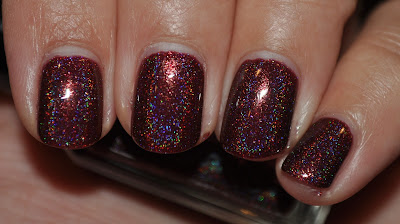 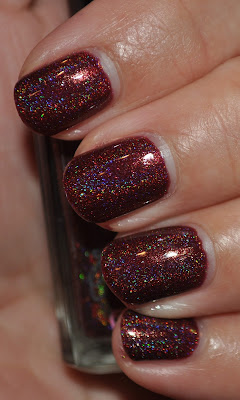 I fell in love with this polish, even though I did not expect to. Yes, it's pretty, but I didn't think I would full on love it. Scruffy Looking Nerf Herder is bold, sexy, and vampy-- without being too much of any of those. It's very wearable and I wore it upwards of 3 days, which is pretty unusual for me (though it also had to do with not being able to change my polish at all during that period). In any case, I think this color is perfect for a polish describing Han Solo (even if it is sarcastic) and it's another one of my (surprise) favorites from this collection.
Posted by Cat Ray at 6:00 AM