And rounding up our lightsaber inspired polishes, I have a special one to share with you today: Darling Diva My M'Effen Lightsaber is Purple! This, of course, is based on the one and only Samual L. Jackson, or rather, Mace Windu, the Jedi character he played in the prequel trilogy. Because he's Samual L. Jackson, he requested a purple lightsaber and Lucas gave it to him. The perks of the job, huh? I'd love to have a purple lightsaber! Honestly, I found Mace Windu to be kind of an asshole (and just having watched The Clone Wars series has pretty much cemented my opinion) but I can't argue with a purple lightsaber being pretty damn badass.

My M'Effen Lightsaber is Purple is, of course, purple. All the purple. Darling Diva describes it as "Linear holo, purple shimmer, loaded with metallic purple and silver flakies." Yes! The base is a purple-pink shifty duochrome, almost a touch metallic, and it's packed with flakies, giving it an almost foil-like finish, combined with the linear holo and pops of darker purple flakies. This is one unique polish with lots going on! The formula was pretty good. It is a touch thick, but generally I didn't have problems applying it. The flakies may want to get a little jagged towards the free edge of the nail, but it wasn't too bad. I used three coats here, though possibly could have gotten away with two. 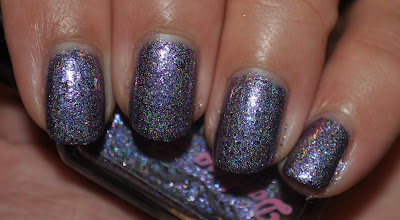 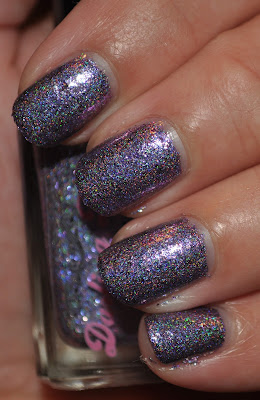 I decided to grab some pictures in natural light to try and capture the duochrome nature of this polish. I don't know if I really succeeded, though you can see a bit of the shift on my index finger in the vertical photo. 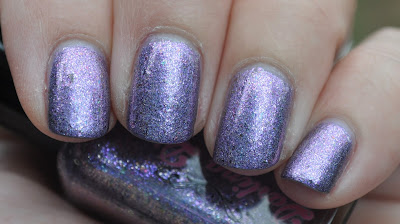 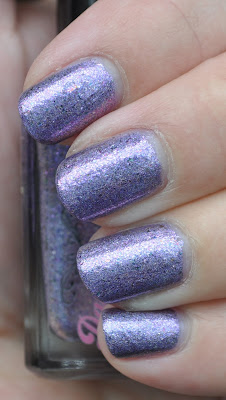 Well, just like having a purple light saber means you're a badass, I think this purple polish is pretty badass too (though we all know I have a purple bias). Gorgeous, complex, stunning-- call it what you will, but I love it! The only thing missing is some glow in the dark action, am I right? =)

The only color I'm missing is a red saber color but we'll definitely be seeing some reds as we move into looking some Star Wars villains later!
Posted by Cat Ray at 6:00 AM