And here's the last of my polishes inspired by the Millennium Falcon, CoverGirl Speed of Light. Ok, honestly, I don't know if Speed of Light was inspired by the Falcon, but here's my reasoning: this shade of grey reminds me of putty grey color they used for all the ship models back when they were making the original trilogy in the 70's and 80's. One of which is the Falcon... ok, maybe it's a tenuous connection at best but that's my story and I'm sticking to it! You can't tell me otherwise!

I'm pretty sure my feelings on the CoverGirl x Star Wars collaboration are well-known, but can be summed in a word: disappointing. The colors they picked didn't see very special or unique (at least with the nail polishes) and honestly, given what indie makers have been able to do with the Star Wars theme, it lacks any sort of creativity or originality. Lucas pushed the boundaries of movie making back in the 70's when he first made Star Wars and this whole collection is just blah! Not that it stopped me from buying a few things with the Star Wars logo on them, but overall, this was a collection that could have been amazing and groundbreaking and instead was completely lackluster. Wasted opportunities!!

But I'll spare you my ranting; let's get back to Speed of Light! This polish is what I would call a putty grey creme. It's a little bit of a chameleon-- in some lights it looks more grey and in other it takes on a putty beige tone. The formula was just ok-- it's a little bit on the thin/watery side, though was pigmented well enough. It did want to streak a bit as a put it on, though it seemed to level off ok if I used a light touch. I ended up using three coats. 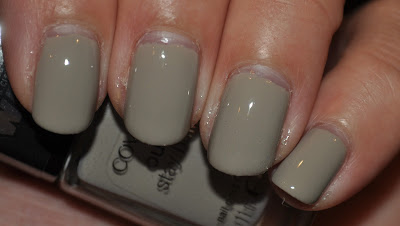 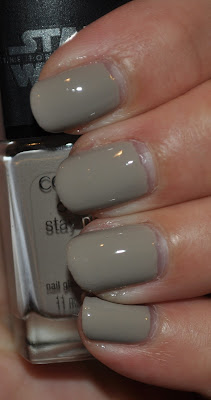 I'll be honest: I'm not terribly overwhelmed by Speed of Light. It's an ok neutral and the only thing that really makes me love it is my nostalgia for the old models in the original trilogy. I'm not quite sure why CoverGirl picked this color, but they did. I don't think it looks great with my skin tone, which doesn't help either.

And with that I will have a one day break tomorrow and be back on Monday with some polishes based off famous quotes from the Star Wars movies!
Posted by Cat Ray at 6:00 AM