Today I have a cheerful little yellow polish called Ammacarre from Love Angeline to share with you! I actually bought this bottle months ago (it was on sale) but due to the pastel nature of the shade, I didn't wear it right away because it felt out of season. And while I don't consider myself to be a slave to trends, I due tend to theme my polishes to the season (darker colors in fall/winter, bright colors in spring/summer-- but there are always exceptions!) and it felt weird wearing this color out of season. But last week we were scheduled to have the nicest day of the year so far (and we did!) so I decided it was time to take the plunge and wear Ammacarre. In the bottle, Ammacarre has a pastel yellow appearance, but on the nail it's a bit more of a sunny yellow with yellow, pink, and blue shimmer in it. Without top coat, it dries to a matte satin finish.

The formula of Ammacarre is about what I expected. It's on the sheerer side, and while it does build up, you do need to be careful of dragging the polish and creating bald spots. Honestly, I was expecting the formula to be a lot worse given how light this yellow looks in the bottle but it applies fairly easily as long as you are careful. I've certainly had a lot worse experiences! That said, here's mine: I put on the first coat and was horrified. It was super sheer and looked very orange-yellow on my nails and looked terrible and for a minute I honestly considered whether I should plunge ahead and just scrap the manicure altogether. I decided to stay the course, and it worked out (whew). I did need four coats to get my nails to a level of opacity that I liked, and the polish does look a little thick on my nails. There is still some visible nail line, but with four coats it's not too bad.

Here's what Ammacare looks like without a top coat: 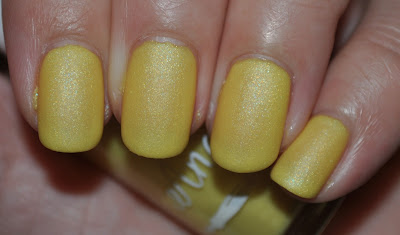 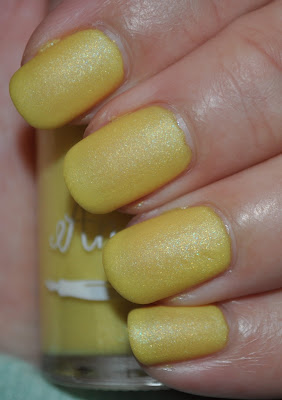 While I was taking the pictures above I managed to dent my ring finger so I decided to slap on a top coat to help it dry down, because four coats meant I would probably have sheet marks on my nails the next morning. So here it what it looks like shiny: 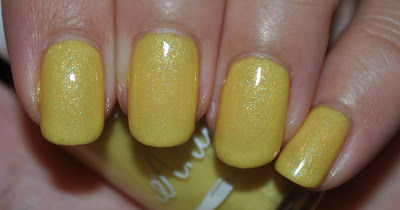 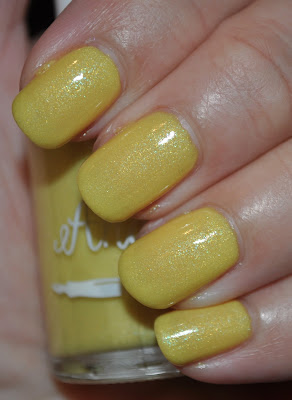 I do have to say, I'm a bit disappointed with Ammacarre. I actually really love the way it looks without top coat, but I wish I hadn't needed four coats to get it looking the way I wanted it too. It looks much lighter in the bottle, and so I had a bit of a shock when it applied darker (aka not pastel) and also brighter than I anticipated. Due to the number of coats I needed and the extended dry time, I added a top coat, but I don't look the finished product quite as much.

I definitely don't hate this polish, it just wasn't quite what I was expecting! But the shimmer is quite lovely and I even got a compliment so I guess it was worth it in the end!
Posted by Cat Ray at 6:00 AM