Today I have a brand that I have featured once before, though it's been since Thanksgiving! As part of my pink themed week, today I have a polish from Nine Zero Lacquer: January 2016 is part of a monthly series of polishes that were limited edition and only available for the month it was released-- but now Jessica has decided to make them available all year round! So if you like any of the ones that I have been released so far, you have until the end of the year to get them. January 2016 is described as a "berry holographic with holographic silver microglitter added in for extra sparkle." It's a beautiful deep berry pink with a nice holographic finish!

As far as I can remember, the formula of January 2016 was good. It was decently pigmented, though it did have a slightly thinner consistency and I used three coats to get the coverage I wanted-- as per usual, this is more due to my giant nail beds-- with smaller or shorter nails, you could probably get away with two coats! But it goes on easily and is super holographic! 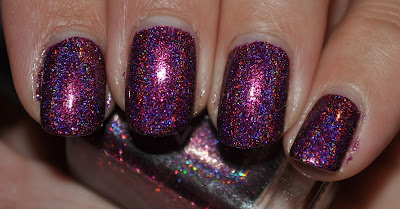 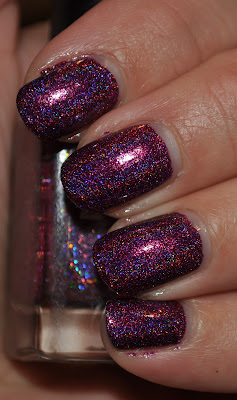 This is a truly lovely polish! So far I have been impressed with the Nine Zero Lacquer polishes I have tried and am definitely a fan of the brand and look forward to using more of their polishes!
Posted by Cat Ray at 6:00 AM