Ok, so I should have posted this manicure a long time ago. I meant to post it when I actually went to see The Force Awakens, but never got around to it and then my laptop died, blah blah blah. But with the return of my laptop, I figured what better time than now, especially because it's been so long that manicure now coincides with the Blu-Ray release of the movie! So... happy release day?! Hahaha. I actually haven't bought a copy yet (gasp!) but am hoping maybe they will have it on sale at Costco when we do our grocery shopping this upcoming weekend. Just kidding, of course I preordered it.

Given that I have been on a mission to collect a bunch of Star Wars themed nail polishes, I knew of course that I would have to use some of these for my movie manicure. Because it was a brand spanking new Star Wars movie, I decided to use polishes themed to the new movie. So I used CoverGirl Nemesis as my base. Nemesis is a vampy plum with red tones; a deep burgundy is more accurate. The formula on this was just ok-- it was a little patchy and uneven. I used two coats here because I knew I would be adding a glitter topper. 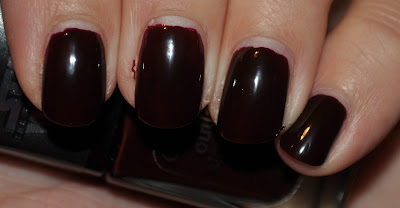 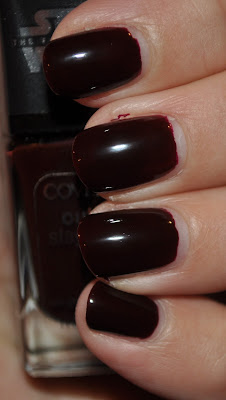 One of the Star Wars themed polishes that I collected recently is from Level Up Lacquer, a new-to-me brand. Level Up Lacquer actually started in 2012 as Daring Digits, but rebranded after a move to Alaska in 2014. So when I saw some swatches of her Star Wars collection, I figured I might as well jump in and get them all! For my manicure, I decided to use BB-8, based on the newest (and possibly cutest new droid), which described as a "glitter bomb with white squares silver and orange hexes, and tiny white specs." This glitter topper is perfect for BB-8! I used one coat here over Nemesis. 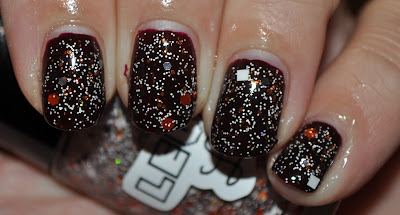 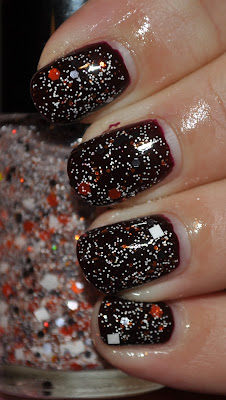 I was happy with how this manicure turned out. No, it doesn't scream Star Wars to a casual person, but *I* knew the polishes were Star Wars related, and that's really what counts anyway. I really love the color combo too. Yay Star Wars!
Posted by Cat Ray at 6:00 AM