I don't show a lot of drugstore polishes here, and it's not because the polishes aren't good or interesting. A lot of bloggers out there are of the mind that some of the drugstore brands are actually coming out with more interesting and creative polishes than the "upscale" brands these days. I haven't been doing this long enough to really comment on this, but I do think that there are some great drugstore polishes out there-- I just hate that it's so hard to find these drugstore polishes. Some places have them, some don't, and there are extremely limited quantities, making some polishes impossible to find, which is supremely annoying. And that's mainly why I don't review a ton of drugstore polishes-- I can't be bothered (and don't have the time) to check several stores waiting for a collection to be released.

For the past couple of seasons (I believe; at least the current season and the last one), Project Runway has partnered with L'Oreal Paris for the make up of their runway shows. This fall, L'Oreal has released a limited edition collection of make up in collaboration with Project Runway called Colors Take Flight, inspired by four different birds: the parrot, the cockatoo, the raven, and the owl, as well as the Amazon. I had seen a couple of the polishes posted online and two of them caught my eye, so I have been scouring my local drugstores for days and days, waiting for this collection to be released.

Owl's Night, as the name implies, is inspired by the owl. This is a deep brown polish with tons of gold shimmer, in addition to having some bronze/orange shimmer. It's such an unusual polish-- I don't think there are many out there like it. I needed two coats for full coverage-- the first coat was a little sheer, and I used a slightly thicker second coat. 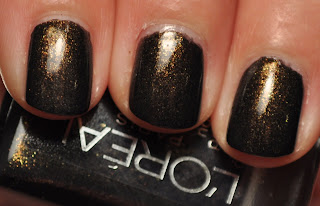 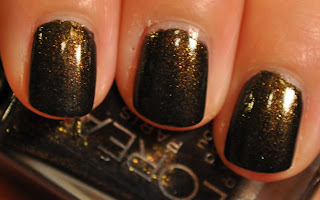 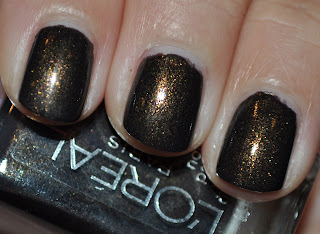 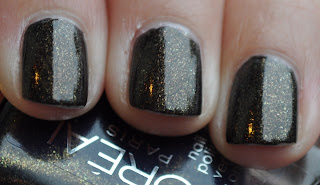 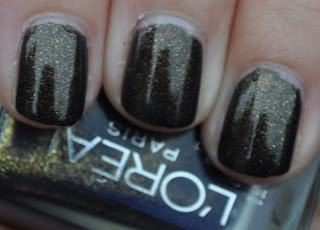 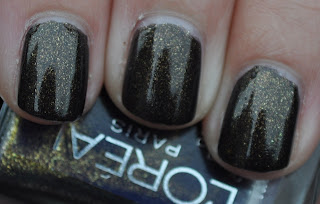 This is a beautiful, unique polish and the color scheme makes it great for fall. I don't own many brown polishes, and this one is definitely a keeper.

I also have to laugh at the timing of this post-- I don't know if any of you out there watch Project Runway, but the most recent episode that aired (this past Thursday) was the L'Oreal challenge, and the designers had to design outfits inspired by one of the four birds and then use the make up from the collection as part of their look. Unfortunately, the owl wasn't picked as an inspiration, which was kind of lame. I love owls!
Posted by Cat Ray at 8:03 PM