Finally, back to Football Friday! There was no Football Friday post last week due to the fact that I was out of town for a wedding. Not that it would have helped-- UW got embarrassed at Stanford, losing 65-21. That's even worse than our loss to Nebraska and there was nothing redeemable about this loss-- it was like we didn't even bother trying to play.

But leaving that behind, this week is Homecoming at UW and we host the Arizona Wildcats for a night, the first of two in two weeks. Currently 'Zona is 2-5 (while UW is 5-2) and actually fired their coach mid-season. However, despite looking terrible for the first half of the season, Arizona crushed UCLA last week in a surprising turnaround, while the Huskies apparently forgot how to play football all together. Additionally, for Homecoming this year, our coach has made this a "black out" game, meaning the team will wear black jerseys/pants instead of our traditional purple jerseys and gold pants. UW actually debuted this look last year for our first ever Thursday game: 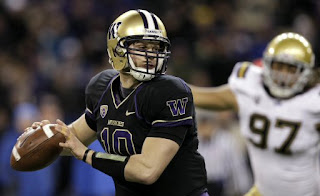 Looks pretty sharp, right? Little tangent now about football uniform fashion. It's become the next big thing for schools to jazz up their existing uniform rotation by adding "non-traditional" colors. Some schools *cough* Oregon *cough* have taken this to an extreme and have a different combo of colors and uniforms every week to the point where it's hard to tell what their school colors actually are. Washington has stayed fairly traditional over the years, aside from a few minor tweaks. I won't bore you with the details. Needless to say, wearing black uniforms was a pretty big jump for UW. I for one like the black uniforms, but I'm glad that they don't make frequent appearances (two last year and one this year so far).

Anyway, on to the polish!! Since I will be sporting my black jersey tomorrow night I decided that I wanted to stick with a nice purple polish that would pop. I decided to pull out a purple polish I hadn't tried yet-- OPI Grape... Set... Match from the Serena Williams Grand Slam England Collection, released this past summer. I have only heard raves about this polish from every review I've read and well, they're right. Grape... Set... Match is a stunning bright royal purple with pink and blue shimmer in it. This is a really stunning polish. 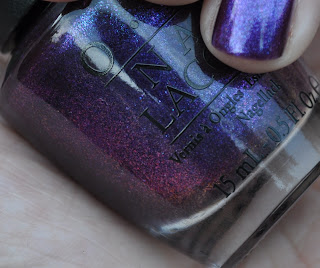 Look at all that gorgeous shimmer! Unfortunately, while my camera picks up the pink shimmer in the bottle, it fails to pick it up on the nail. Instead, you see a bunch of the blue. In reality, this a much more red purple polish-- the "grape" in the name is very appropriate. For the pictures I used two coats, but when I went to apply this for my manicure I decided to use three thin coats to really bring this polish to life, and to give it a bit more depth. You could definitely get away with two medium coats, though. I used Cult Nails Get It On base coat and Wicked Fast top coat with Grape... Set... Match.

Artificial light; these pictures are the most color accurate. Sorry these ones are a bit blurry: 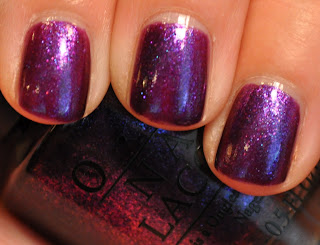 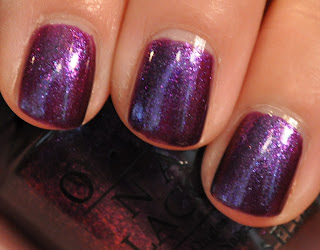 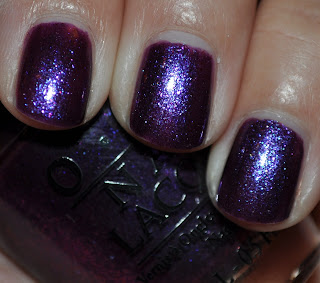 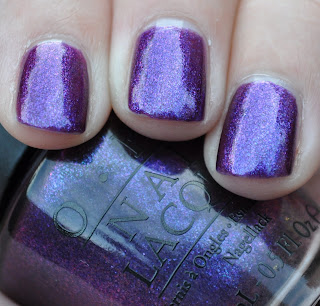 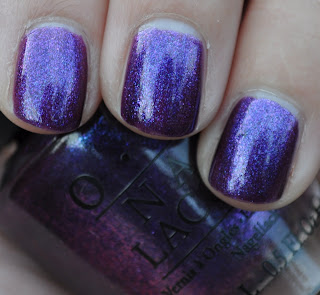 Next week is a huge game for UW-- the last game in Husky Stadium as we know it and we face our most hated rivals in the Pac-12: the Oregon Ducks! I promise to have more than just a purple polish next week!  Until then, let's go Dawgs! Beat the Wildcats!
Posted by Cat Ray at 10:32 PM