Supernatural Lacquer In a Galaxy Far, Far Away and a May 4th manicure

It's Star Wars Day!! Taking a quick break from our tour of the GFFA for a special Star Wars Day manicure! I used Supernatural Lacquer In A Galaxy Far, Far Away which is another polish from the Nouveau Geek Star Wars box. I would describe this an inky black holographic with a golden shimmer running throughout. I say "inky" because this definitely has a green undertone to it, sort of like the ink you sometimes see in pens.

In A Galaxy Far, Far Away has a good formula-- not too thick or too thin. It is nicely pigmented and flows on smoothly, though a thin first coat is a tad sheer. It builds up very nicely in two coats, though I threw on my typical third coat for good measure. You could definitely just do two, though. It dries quickly and smoothly-- no issues at all! 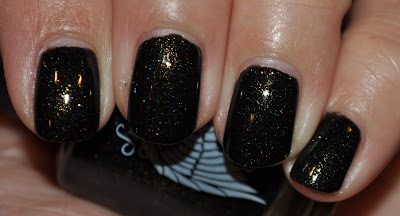 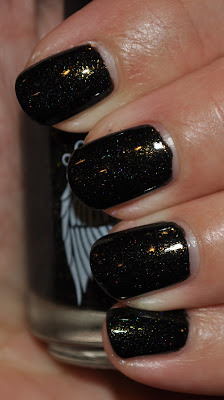 And I had to do a May 4thmanicure, though honestly it's not much of one this year. There were some Star Wars inspired  vinyls from Toadarrific Vinyls that also came in the Nouveau Geek Star Wars box and I decided to use the Rebel Alliance starbird vinyls for my manicure. 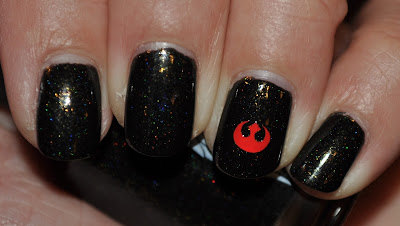 Simple, but it works! This was actually the first time I've used vinyls (what the what?!) but it was super easy! These came off the sheet pretty easily, and were sticky but not so sticky that you couldn't adjust them if you weren't happy with the initial placement. I used tweezers which was definitely the right call, though my placement could still use a little work. I'm happy with the vinyls and how it turned out, though! What do you think?