Glam Polish The Power of the Dark Side

Today I have the other, villainous half of the April Glam Polish duo. Inspired by Darth Vader, one of the most famous (infamous?) villains to grace our screens, Darth Vader. Tall and imposing, you definitely don't want to run afoul of him, especially as he goes around Force-choking people who displease him.

The Power of the Dark Side is described as a "black jelly with a mix of iridescent flakies, rainbow holographic microglitter, shifting iridescent glitter and fine holo microglitter." With the jelly formula, this was a little sheer but built up very nicely. I used three coats for the look I wanted but you might be able to get away with two! The flakies and glitters are packed in there so you don't have to worry about any distribution issues. This was easy to work with! 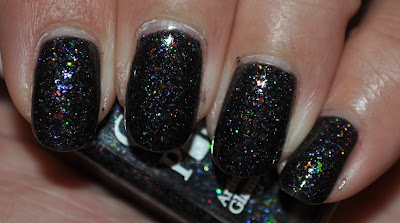 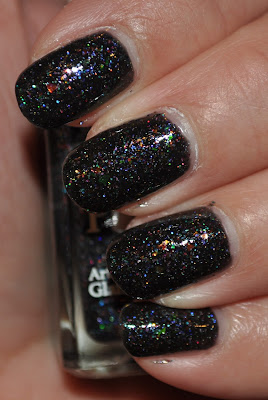 I am generally not a fan of very vampy "goth" polishes-- it just isn't my natural aesthetic! That said, I do like how colorful the flakies are in the dark base. While this is definitely dark, it's also fun and has a lot of character, which I like. I don't tend to reach for darker polishes a lot, but I really appreciate how the color doesn't get lost here. Definitely one of my favorite dark side based polishes!
Posted by Cat Ray at 6:00 AM