Today I have the punnily titled Some Like It Hutt by Lou It Yourself (now Bluebird Lacquer). This was another polish from the Light and Dark Side duos that were released as a collaboration between Lou It Yourself and Native Wars Paints in the lead up to Rogue One! The name, Some Like It Hutt, is a play off the species of the same name. In the Star Wars universe, Hutts are giant slug-like creatures with a penchant for gambling, slavery, and various other criminal activities.

The formula of Some Like It Hutt was great, no issues! It flowed on the nail really well and was very nicely pigmented. The first coat had a few thin spots, but two coats looked good! I think I did a third coat, which was overkill, but it still looks really nice. I think two coats would have been fine. I didn't have any issues with this; it was easy! 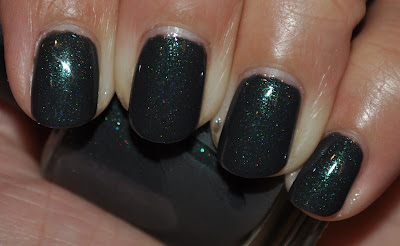 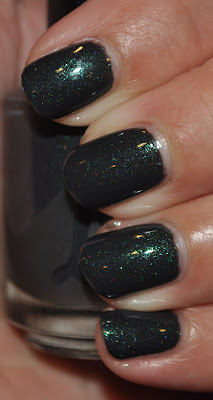 I ended up loving this one. It looked very chic on the nail. Even though it's May, the dark grey base was lovely and the shimmer really livened it up! I also appreciate that even with the dark base, the shimmer didn't get lost. I loved wearing this-- I wore it for only a short time so I'll definitely be picking this up again when the weather gets cooler!
Posted by Cat Ray at 6:00 AM