Wow, this is another oldie! Moving on to another planet, Nerd Lacquer The Lando System is inspired by a line of dialogue in The Empire Strikes Back when Han and Leia are trying to discover a safe port to hide from the Empire. The best option is Bespin, run by Han's old friend and conspirator, Lando Calrissian.

The Lando System is described as a "soft orchid of a Cloud City sunset with rose, copper, and lavender glitter, plus an /insinuation/ of sky blue shimmer." I did turn the bottle upside down a few days before using this to make sure the glitters were suspended evenly, which I think definitely helped, as I didn't have to do a lot of fishing for glitter. This applied pretty well; I didn't have to do too much dabbing or fishing. I used three coats, but feel that two coats would have been fine. I used one layer of top coat, but feel like I should have added another one because it didn't end up being quit as smooth as I wanted. 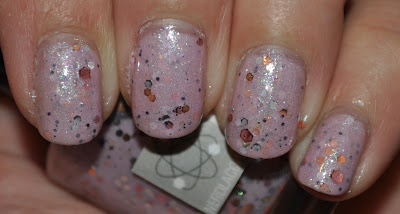 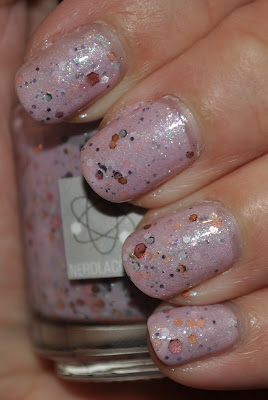 I'm generally not a huge fan of crelly glitters, but I think the combination here is pretty unique. The shimmer makes a nice contrast, and I also feel like the colors help to make this unique as well. I was happy with the way it applied, especially after all this time. I think this nicely captures the colors of Cloud City as portrayed in the movie!
Posted by Cat Ray at 6:00 AM