Another oldie, both in terms of the polish and the planet! Nerd Lacquer Beggar's Canyon is several years old at this point (cough, I just realized I bought this back in 2012, yikes!), and the name is a call back to an area of Tatooine where Luke used to practice his speeder and sharpshooting skills when he was growing up. We also get see this location in The Phantom Menace, when Anakin podraces to win his freedom. Kind of a cool callback, if you're into those sorts of things!

Beggar's Canyon has an antique bronze gold base and has an assortment of gold, orange, and purple glitters in it. The glitter is pretty well dispersed through the polish and I didn't have to do too much fishing, though I did turn this upside down a few days prior to using it just to make sure that wasn't an issue. This covered well but I did use three coats; I suspect that I probably could have gotten away with two. 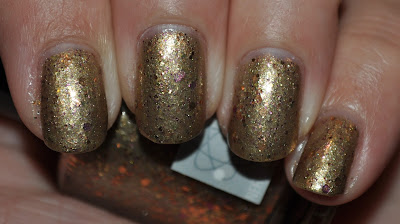 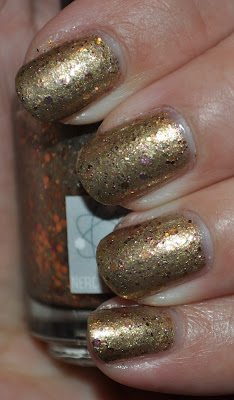 Sadly, I can tell the glitter in this polish has faded-- the purple glitter (and the orange and gold ones) used to be much more vibrant-- just searching for other swatches via Google will show you how badly this has faded. I guess that's what happens when you just let these polishes sit around for so long before wearing them! I also don't find this shade of gold very flattering with my skin tone, though it might have looked better if I had worn it ages ago when the glitter stood out a little more. That said, I do find the glitter mix interesting and pretty and wish I had worn this a lot sooner instead of waiting. Ah well! Maybe some day this will get remade, but currently it's been discontinued.

Happy Friday and May the Force be with you!
Posted by Cat Ray at 6:00 AM