In line with The Lando System from yesterday, I have another polish inspired by Bespin: Darling Diva Cloud City. Rather than the colors we see in the movie, this polish captures the feeling of a soaring, wide open sky. Cloud City is a medium sky blue holographic that includes pink shimmer and multicolored iridescent flakies.

Cloud City has a jellyish consistency and was a little thick while also being a little on the sheer side. That said, it goes on pretty easily and is pretty forgiving. I did need to use three coats to make it mostly opaque, though there was still some visible nail line even after three coats. If you really dislike anything sheer, you could definitely layer this, but I think it looks very pretty and delicate alone. 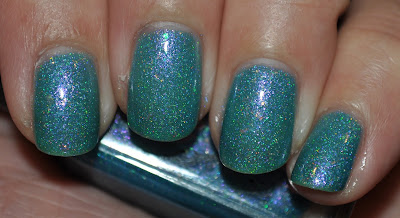 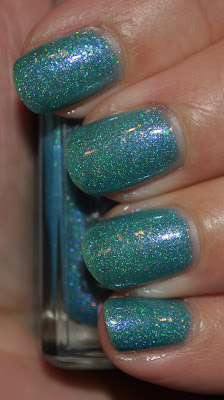 And for good measure, here's an iPhone photo so you can see the flakies, though the lighting is not great: 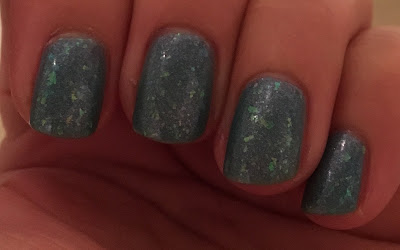 This is really pretty! I like how the same inspiration can result in two very different looking polishes. This color is so soft and pretty and I love the combination of finishes-- I think they work pretty well together without competing too much. I would say that the flakies kind of disappear in the shimmer and holographic finishes most of the time, but do come out with the right conditions and give this some added dimension. Lovely!
Posted by Cat Ray at 6:00 AM