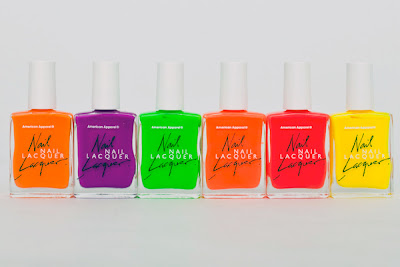 American Apparel is releasing a limited edition set of neon nail polishes, according to refinery29.com. Supposedly they came out today in stores, although I haven't had time to verify that-- however, they do appear to be online. So if you're into neon, or really like AA, I'd jump on these asap! I am not sure if I want these or not, but I tried to order them online and they aren't being added to my cart, so I don't know what the issue is there. It also says they're not available in any of the stores near me, so I don't know if it's a glitch in the system or if they are already sold out.
Posted by Cat Ray at 8:06 PM