In effort to bring some spring into my wardrobe, I got some polishes on sale at Sephora and they are very bright.

Here are the polishes! From left to right they are Access 24/7, Lost Without My GPS, Special Request, Hi Def, and IM Beauty. Four of these (all by Special Request) were part of the Spring 2009 Digital Diva Collection. 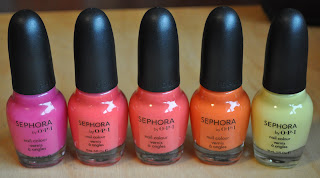 You can see that two of the polishes look very similar in color. Here's another picture where I think you can see a little bit better that they are not quite the same. 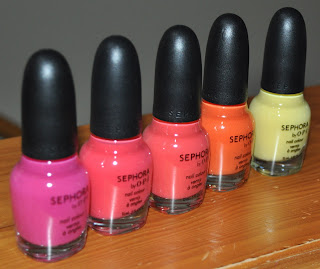 Access 24/7:
This is described as an "opaque juicy magenta pink" and indeed, it's very pink. Think Barbie pink. But I don't wear a lot pink, so this is kind of a fun one to have around to spice things up. Unfortunately the polish was a little thin and streaky and it took three coats to get looking good enough to wear.
Swatch from Sephora: 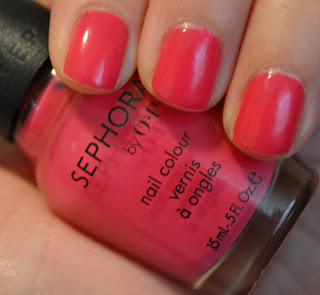 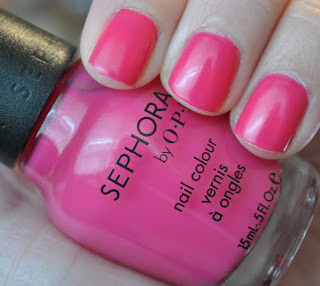 Lost Without My GPS:
Described as an "opaque bright vintage orange-red", this is definitely bright. Practically neon, it's so bright. It's a coral-ish hue, and alternates between being more red or more orange depending on the light. Again this polish was thin and streaky and took three coats to get look this nice.
Swatch from Sephora:

On me this polish isn't nearly as red as Sephora advertises it to be. 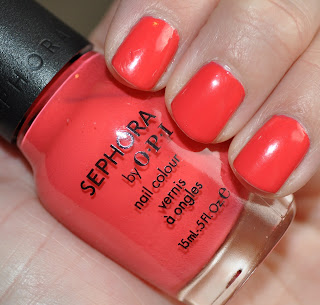 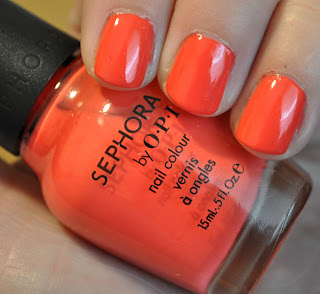 Special Request:
So in the bottles, this and Lost Without My GPS look very similar. However, on the nail they are not quite the same. Described as an "opaque modern tangerine coral", this is really orange. There are definitely red tones, and in certain lights it takes on a reddish melon tinge that's a little more mellow than the bright tangerine that was predominant. Like the others, this took three coats to get it looking this nice and probably could have used another coat.
Swatch from Sephora: 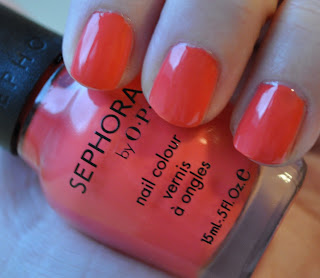 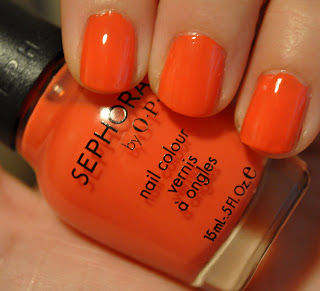 Hi Def:
So those last two both red-orange, but this was orange orange. Like, mac n' cheese neon orange orange. Described as an "opaque rich tangerine", this definitely lives up to it's name. This was three coats.
Swatch from Sephora: 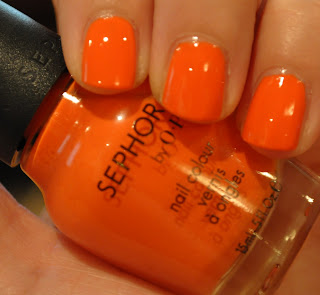 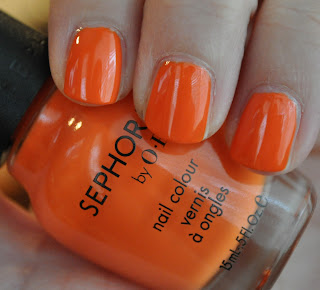 IM Beauty:
This is described as an "opaque bright buttercup yellow" by Sephora, this was again thin and streaky (it's a theme!) and needed three coats to get looking this nice. This is a nice springy yellow color, though, and I liked it. I also think it looked decent on me, which is rare, because I can't really wear yellow.
Swatch from Sephora: 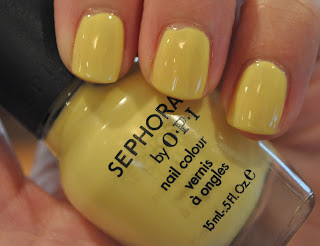 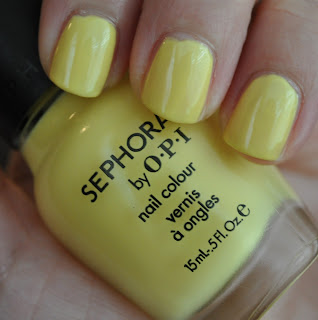 Some fun colors, but they were all a little bit difficult to work with, so I'm glad I didn't pay full price and I can't imagine I will go back to them too often.