Today I have my first Cirque Colors to share with you today! I have Dear Dahlia, which was originally released in a trio called the Kontiki Collection (which was limited edition) and then more recently it was re-released as part of a Nike Pop-In Collection at Nordstrom, which was also limited edition. Dear Dahlia is described as a "fuchsia jelly with multi-dimensional shimmer." The shimmer picks up as predominantly green.

Dear Dahlia has a jelly formula and is definitely a little on the thick side, but not unmanageably so. I used three coats here and my camera picks up some visible nail line, but it's not as noticeable in real life. This does has have a really nice squishy quality to it. I only had one major issue with this: there were some weird black spots that showed up on my nails when I painted. Not a lot of them, but I'm not sure it was some unmixed pigment or some other contamination. It wasn't too bad, but I was a little disappointed because this brand has a very high-end vibe and it was a little disappointed that this happened with my first experience. 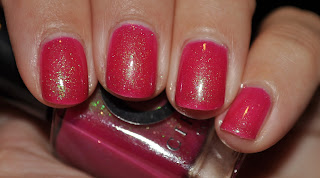 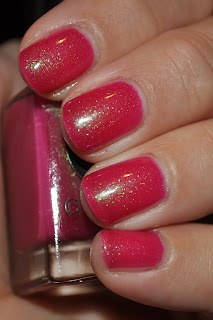 My photographs aren't spectacular but you can really see the green shimmer is. It's so gorgeous!  All I wanted to do was stare at my nails. Dear Dahlia is a perfect summer color!