Veering off from my typical polish posts, today I am bringing you some fun glitters! I have two Nerdlacquers to share with you. I would consider Nerdlacquer to be one of the original indie polish makers-- she was definitely creating some very unique polishes before there was the large explosion of makers and indie polish became a more mainstream thing. After a long absence, she returned to the nail polish world, but still has fairly sporadic restocks, though when I have bought polishes from the store they have arrived in a timely manner and I haven't had issues. I picked up these two polishes in a random restock and finally decided to swatch them. (I have all the Star Wars polishes as well, but am saving those for December-- The Force Awakens, omgyay!)

Crunchy Frog, inspired by Monty Python, is described as a "rich Swiss chocolate brown, lightly killed, and delicately topped with the finest grass green, olive, and lime glitter. The sprinkling of silver white is the bones." I think the color combination is cool, and while this applied fairly easily, I had a lot of trouble getting any of the 'bones' aka the large silver glitters, onto the brush and so there aren't any on my nails. Wah wah. I used two coats here and a shiny top coat to smooth everything out.

Exterminate, inspired by the Daleks from Doctor Who, is described as a "deep blackened bronze with golden, blue, and black glitter." This is a really fantastic polish and applied like a dream-- I didn't have to do any fishing for the glitters. The black glitter in this case is micro glitter, which is not my favorite (at least in black, I feel like it looks random) but it worked here. I used two coats and a top coat here! 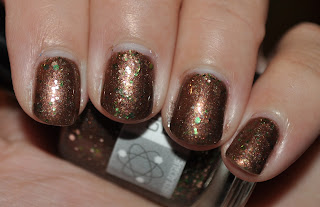 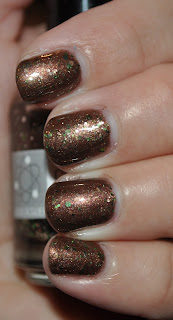 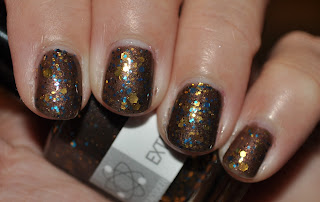 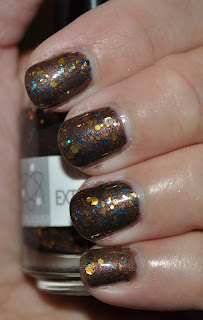 Of these two, I think Exterminate was my favorite. I like the gold and blue in the brown base and it applied smoothly and I didn't have to try to fish for any glitters, like I did (and failed) with Crunchy Frog. But my bottle of Crunchy Frog is truly in desperate need of a good shake and I didn't have enough time. Maybe if I can get the glitter redistributed it would be easier! I also wished I had photographed these in natural light, because I feel like you would be able to see the glitters better-- maybe some day I will reswatch! I hope you enjoyed this post! I think these polishes are a lot of fun and they are definitely unique to my collection.

If you are interested in perusing what Nerdlacquer has to offer, polishes retail for $10 and are only available on her site. She restocks pretty sporadically, though there is a small selection of polishes currently available, including these two if they strike your fancy!
Posted by Cat Ray at 9:00 AM