Welcome to my new weekly feature: Football Friday!! One thing that is essential to know about me is that I am HUGE college football fan. I grew up watching Michigan football with my father and as an alumnus of the University of Washington (where I was a member of the marching band) I still follow/watch the sport avidly. Saturdays in fall are sacred! Nothing beats a good game. My husband and I just bought our first season football tickets this year and so I've decided to make a weekly feature on the blog where every Friday I will post my manicure for Saturday's game. Since UW's colors are purple and gold, expect to see a lot of that. I am also hoping that this might give me the chance to explore some fun combos and even try my hand at something more "artistic", though I'm not quite sure how that will work out.

For my first football manicure, I decided to pull out butter LONDON's No More Waity, Katie. You can probably guess from the name, but this polish is an homage to the royal wedding this past spring. It was originally released as a limited edition polish and sold out rather quickly, but butter LONDON decided to re-release No More Waity, Katie as part of their Fall/Winter 2011 collection. As a note about butter LONDON, the founding creative director, Nonie Creme, is British, but the business has it's flagship store in Seattle, making this a location business for me! No More Waity, Katie is described as an "soft, elegant greige shade with a splash of lilac glitter is the perfect marriage to combine fashion and fun."

This shade is gorgeous. Definitely. I've got about a thousand pictures of it (not really, but darn close). The only problem with No More Waity, Katie is that it's sheer. Really sheer. The glitter is suspended in a sheer dark purple base. I put on the first coat and had to take if off almost immediately. I could have taken the time to build it up so it was opaque, but I was lazy and didn't feel up to it. So I pulled out Zoya Caitlin, which is a creme that is similar in color as a base (I'll post on that later). That was much, much better and so I then layered two coats of No More Waity, Katie over Catilin. Success all around! 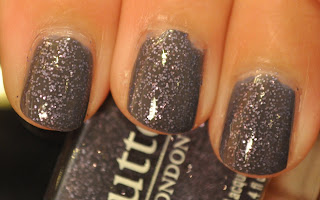 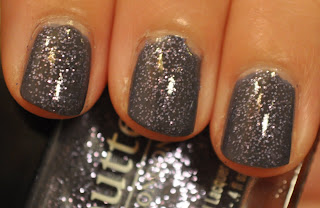 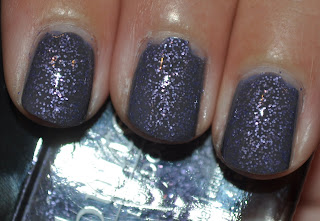 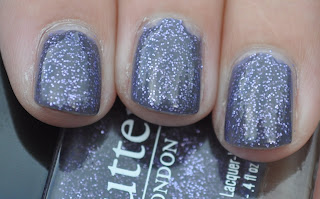 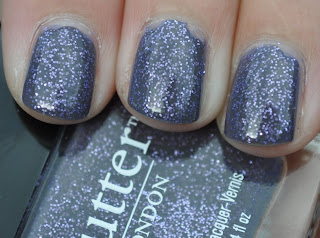 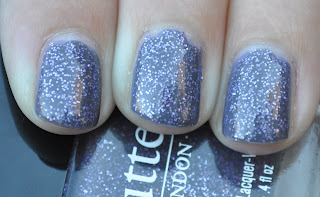 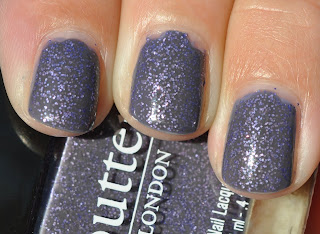 This is a little on the softer side (which is pretty much the exact opposite of the way I am with football), but I think the glitter spruces it up. Plus, it's really pretty. Week 1 of Football Friday, done!
Posted by Cat Ray at 10:16 PM