I bought this polish on a whim when I was making an order at RBL-- because I'm a hoarder and it was running low, I decided to snag a bottle just because. This was from a SpongeBob inspired collection that was released in summer of 2008 and proved to be very popular with polish enthusiasts. I wasn't quite sure I was in love with the color but had seen rave reviews so I took a chance. This polish is described thusly: "If your fingernails could blush, they'd turn this shade of sheer peachy coral. Utterly feminine, yet super chic and sophisticated."

It's a jelly polish, so it is indeed sheer-- I used five coats here and there is still some visible nail line, though not much. I probably could have gotten away with four, but I wasn't really happy with the way I applied the polish.

Anyway, I love this polish. Cantaloupe is one of my favorite colors and this peachy orange coral is pretty darn close, though it definitely leans pink/peach rather than orange. Love this! Super chic and looks great for summer. Currently on the RBL blog Ji recommends pairing this with Bikini Bottom (another polish from the same collection which I own but haven't tried out yet). For my vacation I have Starfish Patrick on my nails and OPI's What's with the Cattitude? in a close approximation of her recommended combo. 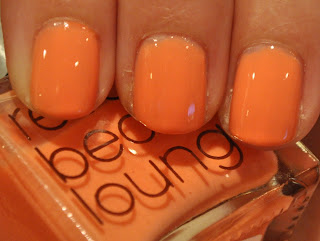 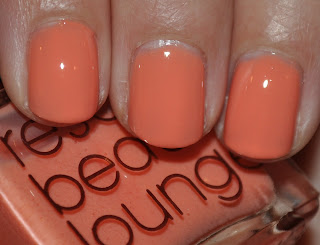 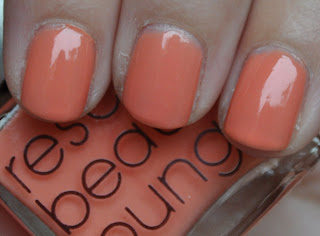