Back to our regularly scheduled polishes!

This is a polish I pulled out while I was wearing China Glaze's First Mate. I wanted to spice up my manicure a bit and realized I had this polish sitting in one of my drawers, just waiting to be tried! I grabbed this from Sephora when it was on sale awhile ago-- it doesn't appear to be available anymore, though you could probably find it on eBay if you really wanted it. Club Queen Scene was released as part of Sephora by OPI's Fall 2010 Rocker Chic line.

Sephora describes this polish as a "sheer smoky gray with fine blue glitter". I'm not really sure this is a terribly accurate description. The base doesn't seem all that gray to me at all (maybe a smoky blue), and they neglect to mention the fact that the blue glitter also appears pretty teal colored in some light. I browsed around and a lot of other bloggers seemed to complain about the sheerness of this polish when worn alone, so I don't have a swatch of Club Queen Scene alone. Apologies! I assume it's like Gleek Out-- you can build it up to be opaque, but it's still a little streaky and messy. I figured that the blue of First Mate would enhance the blueness of the polish and give me a nice base to start from.

In any case, I thought this was really pretty with a blue base under it! Just the right amount of sparkle to spice things up. I bet this would also look really pretty over a teal or even black base. 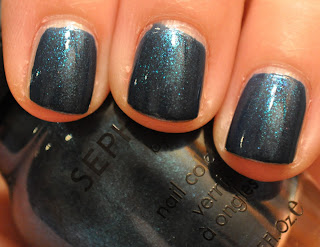 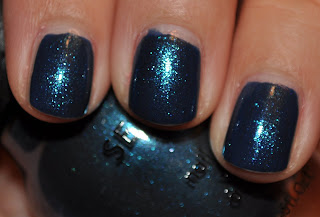 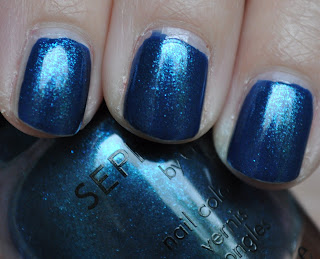 Email ThisBlogThis!Share to TwitterShare to FacebookShare to Pinterest
Labels: blue, sephora by opi