I live in Seattle and in the past year ALL of the Trade Secrets in the immediate area closed. I'm not sure why, but in any case, all the ones close to me closed their doors. At the time I was really devastated because I hadn't discovered Ulta yet and I didn't know where I was going to buy my OPI polishes. That's all worked out now because an Ulta opened nearby, and there are still some Trade Secret stores in the PNW area. This weekend my hubby and I were back down in Oregon for my FIL's surprised 60th birthday and Father's Day. Conveniently, there is a Trade Secret very close to their house. My dad had to stop and pick up a card, so I popped into the store. I was a little disappointed with the selection of OPI polishes-- it seemed very picked over and the store itself was very quiet for a Saturday afternoon. I didn't see anything I was dying to have, so I was about to leave when I noticed a display by the door with Essie (and some OPI) polishes for $2. Awesome! So I picked up five polishes and took them up to the counter and the girl rang them up and asked for $5-- they were all half off! Since I had $10 in cash I decided to pick out another five and this is what I got:

Nine Essie polishes and one OPI! For $1 each!

Up close we have:

From left to right we have: Guilty Pleasures, Watermelon, Wife Goes On, Very Cranberry and Jag-U-Are. 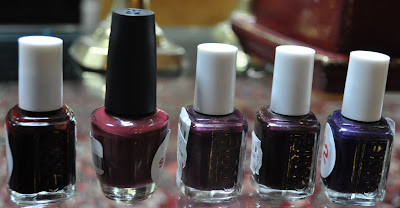 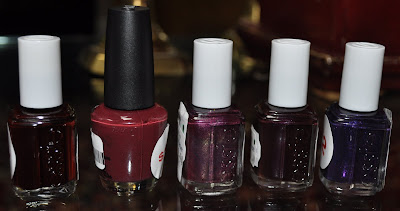 From left to right: Wicked, Can You Tapas This?, It's Genius, Damsel in a Dress, and Sexy Divide.

Awesome! I love finding awesome deals like this. I want to stop and get some more, but will restrain myself.
Posted by Cat Ray at 12:14 PM