Nostalgic Lacquer Take On Me

Tonight I have another polish from the Nostalgic Lacquer New Wave Winter collection: Take On Me! This polish is named after the awesome song by A-Ha. I love this song. One of my favorites! And so it's probably not going to surprise you that I ended up loving this polish.  Nostalgic Lacquer describes this as a "milky white base with navy blue, orange, magenta and teal glitters that create an amazing depth". Can't argue with that.

I decided to wear this on it's own rather than layer it over a base. It was a little sheer in the first coat and took some getting used to when applying it, but I eventually got the hang of it. I used slightly thicker coats here. Dry time was pretty good. Here I used 3-4 coats of Take On Me, depending on the nail and how patchy I thought the white base looked. Overall, three coats gave me fairly opaque coverage, though I noticed I had some thin spots on my larger nails (ring, middle, thumb). It also dried down to a pretty smooth finish, but I used Cult Nails Wicked Fast top coat to finish it off. 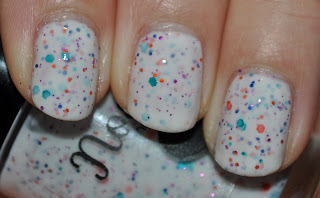 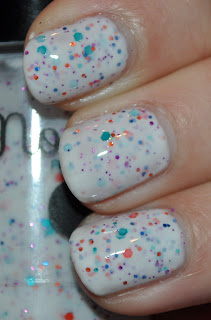 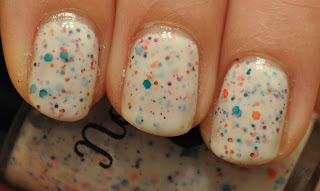 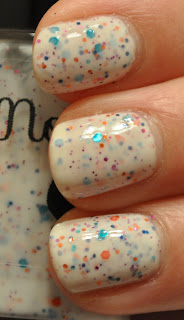 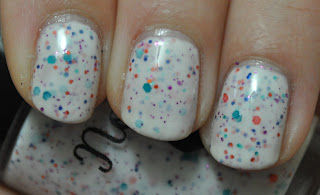 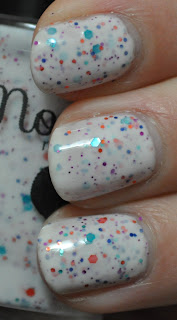 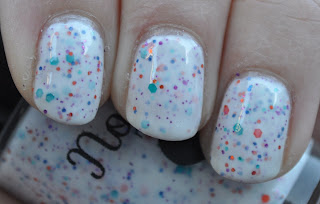 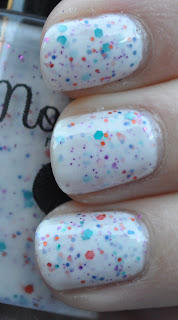 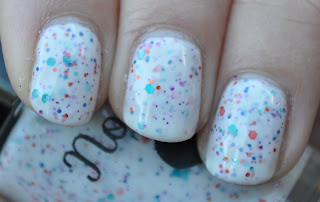 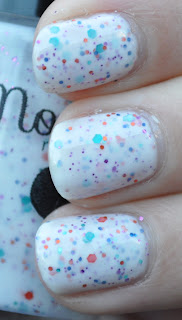 I loved this color combination-- it's unique and very pretty. I loved the speckled look this gave my nails. I received a ton of compliments while I wore this, which always makes me happy. And this polish totally deserves it, because it's lovely.

One thing I did notice about Take On Me was that after a few days (wearing it as a full manicure) the white base seemed to be turning pink. When I look at my bottle, the milky white base is still white but I feel like maybe some of the glitter  bleed on the nail. I'm not sure, but the base was definitely pinker than it was when I applied it. I should have taken pictures. But like I said, the bottle doesn't have any pink in so I'm not sure what the issue was.

Nostalgic Lacquer has a new site and the New Wave Winter collection is available for $9.75 a bottle.
Posted by Cat Ray at 9:42 PM