It's that time again: Purple Friday!! Last week's game against Rutgers was pretty perfect except for our weird weather, which was incredibly rainy in the morning followed by intense sun. Oh fall, never boring! (Though it sure does make it hard to plan, hah!) The weather forecast for this Saturday says sun, so hopefully it will stay that way and we can enjoy the game without getting rained on. This week we play Idaho, which, realistically, should not present much of a college. Most "power conference" teams (aka any of the big conferences: Pac-12, Big Ten, SEC, etc) have an A-B-C non-conference schedule (or some variation thereof) where A is another power conference team, B is another FBS school from a lower conference and C is usually an FCS school. Rutgers was our "A" game, so now we move to our "B" game. In the past several meetings between UW and Idaho, it really hasn't been much of a game; most recently in 2009 we beat them 42-23, which looks close on paper but was probably not as close as the numbers would suggest. Of course, with football, there's always a chance for an upset but I'm rooting for the Huskies to roll to an easy victory and our second/third string can get some more practice. For this week I chose Polish 'M The 4th Year as my purple polish, which was made to celebrate the fourth anniversary of Polish 'M!
The 4th Year is described as a "eggplant base with 3 different colors of UCC mega flakies, electric blue micro flakies, neon purple micro flakies, a teal/pink flash shimmer, silver galaxy holo glitter and magic holo micro flakies." So this polish has a lot going on! I didn't have any issues applying this and it went on smoothly even though it's packed with flakies, though I think I used threee coats here. (I say I think because I swatch these polishes for the post and then wear a full manicure for the game and I swatched this a couple of weeks ago and don't remember. Bad blogger!) A lot of other people have said they used two coats, so I probably just used three because I'm crazy like that! 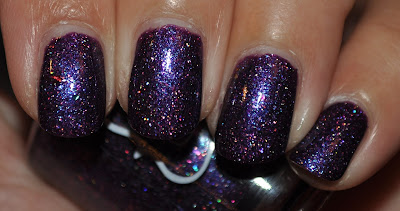 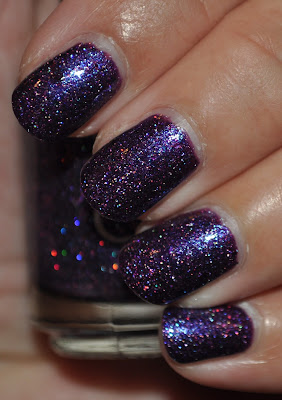 Again, I'm not in love with these photos because it felt very difficult to get anything in focus or color accurate, but it is what it is! I think you can tell how sparkly this is! And that I absolutely love! Hopefully with some sun (fingers crossed) I can add some sparkly pictures later. I love this; the color, the sparkle, everything! It's awesome!
Go Dawgs! Beat the Vandals!
Posted by Cat Ray at 6:00 AM