Programming note: my posts will be a little out of sync this week because I didn't take my laptop home over the weekend; I may try to play catch up during the week or this may just be an off week depending how work/life goes.

Today I have another new to me brand, Chaos & Crocodiles! They aren't really new to the indie polish scene, but this is the first time I've tried one of their polishes! This is another Hella Holo custom from June, so sadly not available anymore. I grouse about having to join having to join various FB fan groups, and it's true, I find it annoying, but the customs created can be pretty rad. Cheshire Rose was, like I said, one of the June customs and is described as a "red-purple based blue to red multichrome holo." There was actually another straight up purple as a custom but I decided to pass on that in favor of the duochrome.

Listen up everyone: I only used two coats here!! Say what?! Ok, admittedly it was because it was getting late and I was tired and just wanted to get my polish on and go to bed, but this also applied beautifully and I didn't have any issues at all. 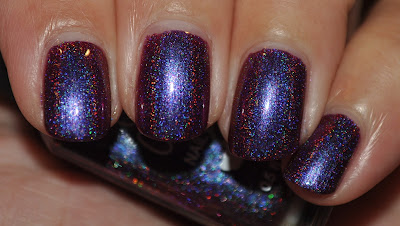 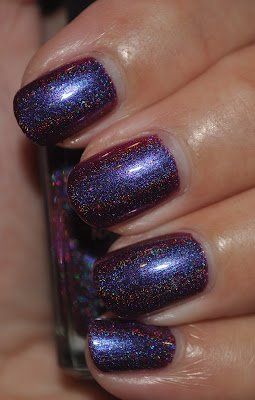 Phone pic so you can marvel at the duochrome... gorgeous! I fell in love with this polish; it's just so damn pretty that it's hard not to. Honestly, I feel like I could stare at this for days and not get tired. The duochrome is just stunning and the holo is great too. This was my first experience with Chaos & Crocodiles but I am really impressed and am looking forward to trying more of their polishes in the future!
Posted by Cat Ray at 6:00 AM