Skipping around, today I have the January Polish of the Month from Colors by Llarowe. This was released back in January, and is no longer available (sorry). The CbL polish of the month is available on the first day of month for preorder (it looks like they are now available for a 24 hour period) and then they are gone, though if you miss the preorder you can potentially find them at other stockists later-- I know I have picked up a couple from Harlow & Co in Canada when I missed have preorders in the past. The January polish is Winter's Dark Nights and it is described as a "charcoal black scattered holo base with intense purple sparkle shimmer."

Like most CbL polishes, Winter's Dark Nights had a good formula and was easy to work with. The first coat was a tad on the sheer side, as is common with these types of polishes, though still gave good coverage. Two coats was good, but with my wide/large nail beds I used three coats to get the coverage I wanted. I suspect most people could get away with two coats. If I remember correctly, this did dry down to a slightly matte finish, so you do need a top coat to make this sing! 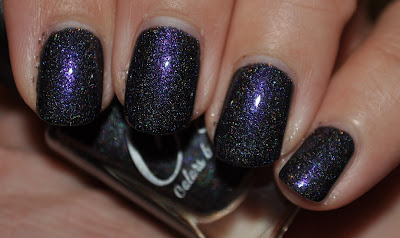 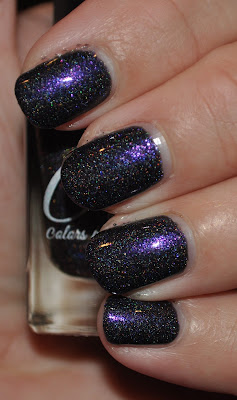 My photos don't really do this justice, but this is a complex little guy. The purple shimmer adds an almost duochrome-like finish to the polish. It's really very pretty!

If you're interested in the CbL polishes of the month, the April one goes live tomorrow, April 1st, at 12pm MDT for 24 hours.
Posted by Cat Ray at 8:00 AM