This is going to be a totally random post because I did these manicure back in January for the NFL play-offs and then the Seahawks lost (womp womp) and my laptop was dead and so of course they weren't posted. But if I don't post them now, even though it's not football season, you'll probably never see them! So this will be short and sweet!

Up first I have a manicure I did using solely Lucky 13 Lacquer polishes! I picked 12th Woman as my main polish, and it's a deep navy blue crelly polish. I'll have a review later! I then used a Born Pretty Stencil and added Unleash the Beast, a blue/green duochrome flakie for the pattern. 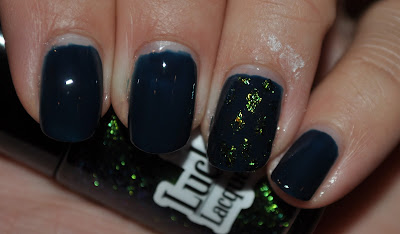 The second manicure I have to share with you is one I unfortunately I didn't love. Not because the polishes were bad, but because the colors were off from what I had imagined in my head and I just wasn't really thrilled with the whole look. It happens, right? I used Pahlish Winds of the Cloud City and Fairytale Finish Turning Over a New Leaf for this manicure. 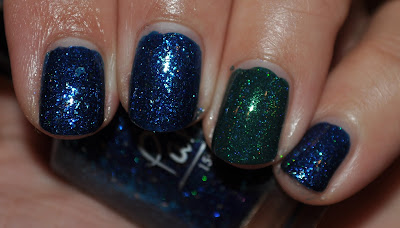 I'm just going to call this my retro Seahawks mani and leave it at that, because the colors match better with the retro (aka 70's and 80's) Seahawks uniforms. Both polishes were great but it wasn't the look I was going for. Ah well!
Hope everyone is enjoying a nice weekend!
Posted by Cat Ray at 8:00 AM