Today I have a more recent, "new to me" brand to share with you. I was introduced to Love Angeline thanks to Amanda aka Fashion Footing and decided I needed to give them a try myself! Love Angeline had a Black Friday sale so I snagged a few polishes on the cheap as my first foray into the brand. Today I have Shandy to share with you, which is one of her shimmer matte polishes from the Let's Grab a Drink collection. If you don't know, a shandy is a beer that is mixed with a soft drink or juice, usually carbonated lemonade, ginger ale, or orange juice. Shandy is described as a "golden yellow matte polish with an intense flash of gold shimmer."

The formula on Shandy was a dream; exactly what I want from a matte polish. It wasn't too thick or too thin; it flowed nicely on the nail and built up easily  without getting thick and gloopy. The first coat covers nicely, though is a bit sheer. Two coats gave pretty good coverage, but I ended up using a third just to make sure there were no patches, though quite honestly you could get away with two if you have smaller nail beds than I do-- I tend to use three as my standard unless it's definitely opaque enough for two. 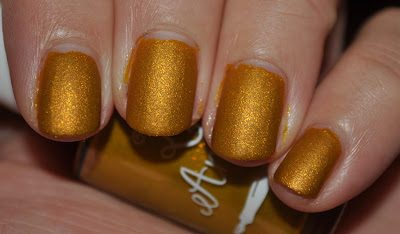 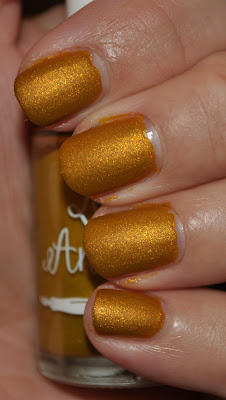 In summary, I love Shandy! (Plus shandy is delicious to drink-- perfect for summer!). This color is kind of funky and can lean green in some lights, so it may not be everyone's cup of tea, but I love it. The formula was great and for a matte, it wore very well on me. I generally don't mention wear time because I change my nails so frequently, but I got three days of wear out of this manicure, with no top coat and only a few minimal chips. Bonus!!

In short, this polish really impressed me-- I have a couple other to show you soon, but I am definitely becoming a fan of Love Angeline polishes!
Posted by Cat Ray at 8:00 AM