Another Friday, another late post. Sorry! Tonight's a real quickie because everything has gone to hell in a handbasket with my husband's work, which is no fun for either of us. So basically, no one is happy. Tomorrow the Huskies play the Utah Utes. They are currently ranked #12, so it has the potential to be a challenging game, though the teams are fairly evenly matched on paper. Should be an interesting game, which we hopefully win!

I was having trouble deciding on a manicure this week and tore up the house looking for a polish that I then ended up not using at all. Ah well! At least I found the polish I was looking for. I settled for a simple accent nail this week, something I haven't done in awhile, so that works out well! I went through my purples and picked out Fairytale Finish A Fairytale Began, which is from the Fairytale Finish one year anniversary duo. It was a little streaky on the first coat but evened out nicely with two coats-- I ended up using three to cover a few thin spots. For my gold accent nail, I used Girly Bits Selfie Bomb, which was released last year and is a gold holo microglitter. It is a little sheer but builds up nicely-- I used three coats here. Both dry down quickly (I've actually worn Selfie Bomb alone before and will review it later). A Fairytale Began ended up being a little darker than I initially wanted, but it still looks good! 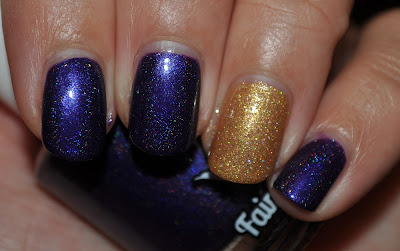 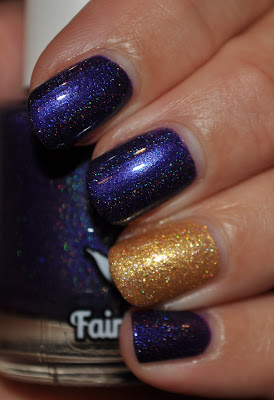 Hope you enjoyed my quickie manicure! Have a great weekend all!