I usually don't paint my nails for the Seahawks because I tend to have my nails painted for the Husky games on Saturdays, but this week is an exception because my husband and I are attending the game tonight! So I wanted to a) paint my nails and b) get up a quickie post to show you!

This is a pretty simple mani-- I had Go Hawks! from Liquid Sky Lacquer kicking around-- it's a mini bottle that she released one of the years the Seahawks played in the Super Bowl. It's a glitter topper with blue and green hex glitter and small green microglitter in a clear base. I initially thought I might layer it over a grey base, but decided to use silver instead. The closest silver I had on hand was A England Excaliber, so there you have it! I used two coats of Excaliber and then dabbed one coat of Go Hawks! on top. I think it looks good! 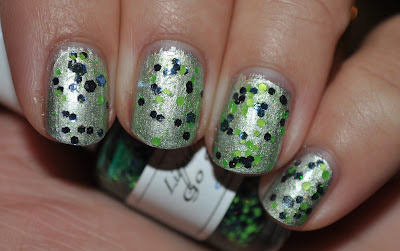 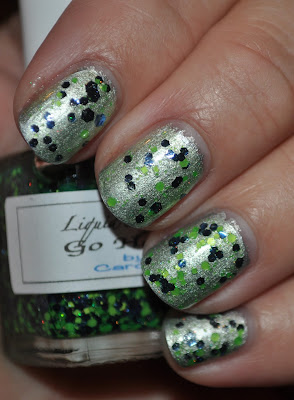 Hope you all are having an enjoyable Sunday! Go Hawks!
Posted by Cat Ray at 1:49 PM