The Huskies managed to pull out a win over a top-25 ranked Utah... really I feel like we could have run away with the game, except for an early turnover helped give Utah momentum AND points and we had to do some catch up! But luckily we swung the momentum back in our favor and ended up with the W! I was getting very anxious and ended up almost finishing a puzzle in an effort to avoid watching the game, hah. This week we have another away game, the Cal Bears, and my husband and I are actually headed down to the Bay Area to watch the game in person! We're trying to hit at least one away game a year and we were initially also going to go to Arizona in September, but it didn't end up working out (aka we got lazy and didn't our shizz together). But we're going this weekend! I'm worried about this game too, but really all of UW's games in November are killer. Hopefully the Dawgs come out strong and it's a good game!

Traveling has thrown me off and I'm pretty unprepared for blogging in general right now! I got back from my trip to Wisconsin and hadn't even changed my polish, let alone picked out a new purple for Purple Friday... I was casting around to think of what purple polishes when I remembered that I had Zoya Iris lurking in one of my boxes and I thought "aha! A brand I haven't worn in awhile... I'll use that!" Iris is described as a "deep amethyst with a fuchsia pearl fleck in the traditional MatteVelvet finish." I was a little concerned when I applied my first coat and it looked more red (or perhaps magenta) than purple. I would say that Iris leans a lot more red than I expected but as you layer it, it deepens and takes on a more purple tone. I ended up using three coats, though two probably would have been sufficient. I liked the depth that three coats had. The formula was smooth and not too thick! 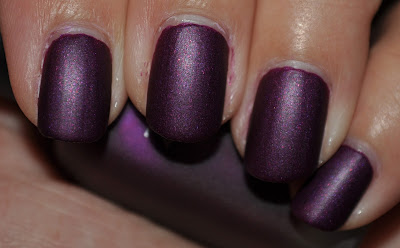 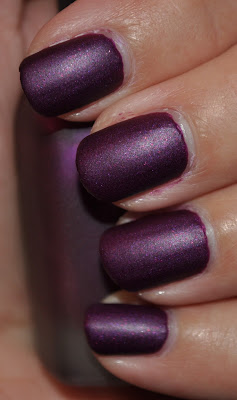 Because Iris is a matte, I also decided I needed to show it to you guys with a top coat: 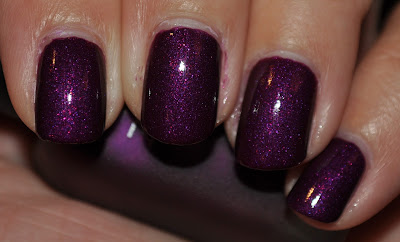 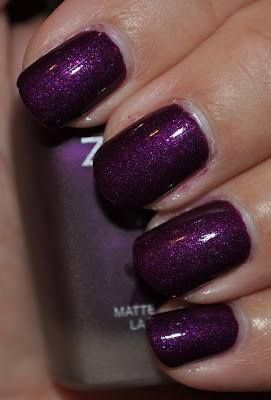 I'm not sure if I would have chosen Iris if I had more time, solely for the fact that it leans a little more red than I was anticipating-- the color itself is gorgeous and flattering. The formula was good and it looks good either matte or with a top coat!