Let's kick off the week with a bang, as it were! Today I have an older Enchanted Polish, Congratulations, which is actually happens to be available right now-- it was re-released this year and has been in stock for awhile. I believe it was originally released in 2013. Congratulations is a beautiful bronze holographic with a slight gold/green duochrome shift. I've had this sitting around for some months, but the color seemed appropriate for the fall season so I decided to wait until fall and then grabbed it to use!

The formula on this was a little thin, compared to some other Enchanteds, but not difficult to work with. The first coat was a bit sheer, but built up nicely. I ended up using three coats, but that's pretty standard for me, as I have probably mentioned a few thousand times. You might be able to get away with two coats but I felt three was what I needed to get the opaque coverage I wanted! But other than being on the thinner side, I had absolutely no issues and it applied easily. 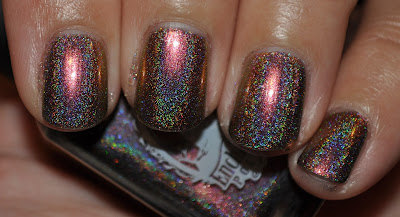 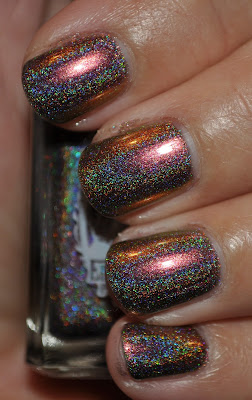 The rainbow on this is just stunning, isn't it?! So freaking beautiful. I love how strong it is, it's just entrancing. I didn't find the duochrome to be very strong in this polish, compared to others from the same collection (like The Youth or Future Reflections) but it was still hard to tear my eyes off it. So beautiful!
Posted by Cat Ray at 6:00 AM