Hey all! I took a little bit of an unintended break over the holidays, but between traveling, said holidays, and being sick again... blogging wasn't really on my mind. Well, it was, but I could not muster the energy or time to get anything accomplished. So let's get 2017 off to a festive start! Today's polish is actually from Nine Zero's 2015 Christmas collection and it's called Twinkle Lights and is described as a "silver holographic with semi-transparent rainbow glitter." This sums it up nicely!

Twinkle Lights was pretty easy to work with. The first coat was a bit sheer, but it built up nicely. I used three coats and there is still a little hint of visible nail line but it's not distracting-- the polish is so sparkly that you definitely don't notice! The red, blue, green, and yellow glitter are fun pops of glitter but not hugely distracting; because they are semi-transparent they glow a bit but blend in nicely with the holographic sparkle. My only very very minor quibble would be that the yellow glitter gets a little lost, but it's a fun surprise when it pops out and reminds you it's there! 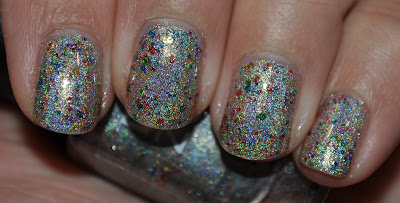 Again, this is another polish I wish I had worn earlier but it's so pretty that it makes up for any delay! I love how sparkly this is and I think it perfectly captures the delight of holiday lights-- something I personally love and wish we would keep up all through out winter when it's so grey and dreary. Twinkle Lights is a fun holiday polish that frankly doesn't feel too "holiday" if you catch my drift. I feel like you could wear this are other times of the year and people wouldn't necessarily think it was for Christmas. I loved this! If you like this, it's still available on the Nine Zero site, along with a golden version called, appropriately, Golden Lights.