Like I said, I went on a green kick last month and so here's another green polish for you! Today's polish is Daily Hues Nail Lacquer The Peacemaker. This polish was actually a custom for someone in the FB group, but she gave permission for Jenn to recreate the polish in a small batch for anyone who was interested in buying it. The unique color intrigued me, and so I decided to snag a bottle while I could. The designer of this polish says that it was based on the saying "extending the olive branch" and so it was given the name The Peacemaker. The polish is an olive green creme with golden shimmer flakes and just a tiny bit of holographic sparkle.

Big news: I only used two coats here! This is a pretty thick creme, but not in an unworkable way-- the kind that's nicely pigment and goes on easily and so two coats is just perfect! I didn't have any issues and this was easy to apply! Despite the darker base color, the shimmer isn't swallowed up and gives the whole polish just the right amount of sparkle and light without being overwhelming. 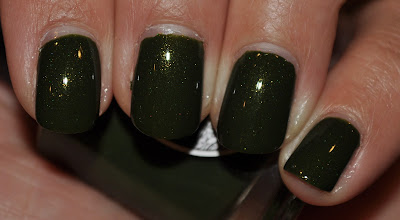 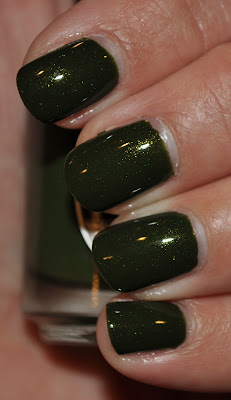 Hey look, another green I like! Maybe the world is ending, haha. But seriously, I do think this is a really love polish. The color, the name... it just works! As I mentioned the last time I blogged about a Daily Hues polish, the brand is currently on hiatus which may or may not be permanent (at this point I would guess permanent but we'll see) so unfortunately this polish is no longer available. But I still have goodies from Daily Hues I plan on sharing with you this year!
Posted by Cat Ray at 6:00 AM