Today I'm backtracking to another polish that's been lingering around, unloved in my pictures folder since March (though it's good I have a few of these, because otherwise I wouldn't have anything to post, hah). This is Native War Paints Cup of Joe, which was originally released as a limited edition in the January monthly sub box but was then made widely available because so many people were clamoring for it after seeing photos and swatches. This is actually oneIt  of my first Native War Paints purchases, along with Coffee With Lots of Cream and Sugar which I've already shown you on the blog. Cup of Joe is a deep rich brown with a strong golden shimmer.

Again, I wore this back in March, so my memory is a bit fuzzy on the details. I certainly don't recall having any problems with the formula and I remember it being easy enough to apply. Because of the dark color, it's possible I used just two coats, though I may have possibly used a third for good measure. 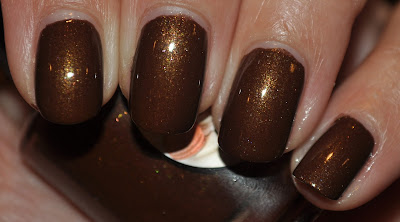 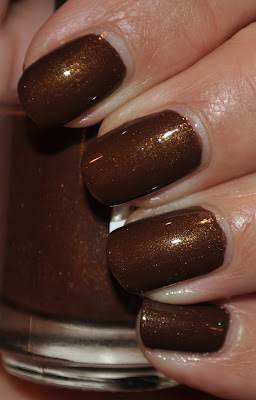 You have all heard me say before that I am not a huge fan of brown polish, but I also like to challenge myself and take risks (at least, with wearing polish-- it can be removed!). And Cup of Joe is a pretty awesome brown-- the golden shimmer really gives it a lot of richness and depth and really makes this polish sing! I think this will be a winner this fall when I want deep colors, plush fabrics, and a warm drink by the fireplace. This is simple gorgeous!
Posted by Cat Ray at 6:00 AM