I'm easing back into my posting and quite honestly, have just not been on the ball enough to get posts written up/photos edited ahead of time. I had been trying to do that and it had actually been helping me a lot but now I'm tired and behind. So I'm going to stick to 3 post per week schedule until I'm feeling like I can get back in the groove of more posts in a week! I have also started leaving my laptop at work during the week, making it more difficult to post during the week. Today I have a polish I wore awhile ago (and it was also released awhile ago)-- Nine Zero February 2016, which was the monthly polish from Nine Zero released backed in February. I actually wore it in March, but of course it's been sitting on my SD card since then and I just haven't gotten around to posting it! A bit of a shame because now I probably don't have as much to say about it as I could have back when I first wore it, but ah well!

February 2016 is described as a "periwinkle blue holographic with holographic silver microglitter added in for extra sparkle." This is an accurate description, so no quibbles there! Being that it's been at least three months since I wore this, I don't recall having any issues when I applied this! I am pretty sure I used three coats here because that's my MO but you could probably get away with two if that's your jam! 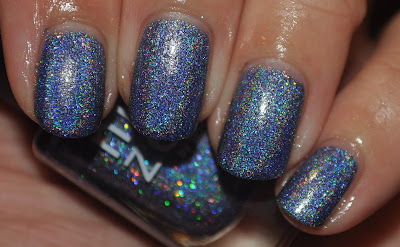 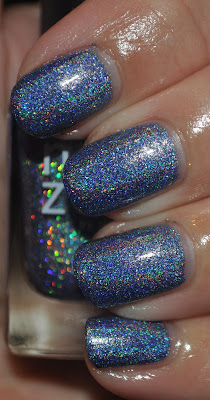 Gorgeous, isn't it? I love these periwinkle ones and really, you can't go amiss with holo and microglitters! The formula is good and I continue to like the polishes that make up the Nine Zero brand. Luckily, if you like this polish, Jessica, the creative mind behind the brand, has decided to make her POTMs available until the end of the year, so you can go have a look if you are interested! I still need to pick up the May and June polishes!
Posted by Cat Ray at 6:00 AM