Blue nail polish is my true love. I'm serious. Blue is my favorite color and my personal philosophy is that blue nail polish goes with everything. It does, I refuse to listen to anyone who says otherwise! The amount of swatches of blue polishes I have waiting to be published is a little obscene. It's obvious where my heart lies. And along those lines, today I have Love Angeline Cosmo to share with you. This was originally released as part of the Fall 2015 Let's Grab a Drink collection.


Cosmo is described as a "darkened royal blue matte polish with an intense flash of blue and purple shimmer." I'm not really sure what the color has to do with the drink (Cosmos are usually red in my experience) but I can roll with it because it's such a gorgeous color. Fair warning, I did wear this awhile ago so my memory is a bit fuzzy on the details. I don't recall having any major issues, though I think the formula was just ok. I can't remember the number of coats I used, probably 2 or 3! 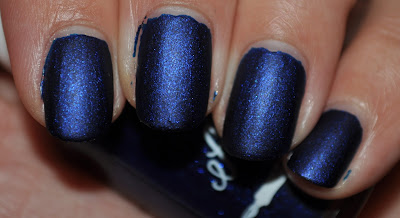 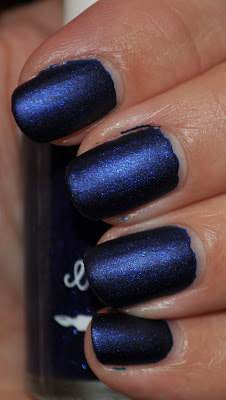 (Ugh, apologies for the lack of clean-up! Looks terrible but I remember being too tired to deal with it at the time.)

Here's a quick shot with top coat (still a bit messy-- I think I had trimmed my nails and then painted on an additional coat) so you can see how shimmery it is! 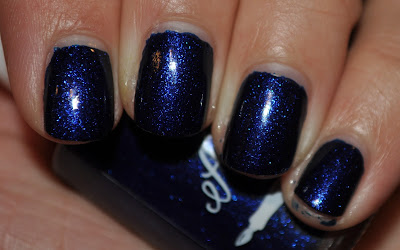 Gorgeous! My biggest issue with Cosmo is that oh boy, it wants to stain. Not necessarily your nails, but even with careful removal I felt like there was blue everywhere! This polish is also discontinued, along with the rest of the collection, but maybe it'll make a reappearance someday! I love these shimmery mattes, though-- they are so versatile!
Posted by Cat Ray at 6:00 AM