I'm running so behind, as per usual. I keep thinking maybe I'll catch up, but hahahhaha I think we all know the truth. Maybe if I could take a week long vacation with my kids and my husband. ;-) Not likely! This week I have the July Neverending Fairytales Box from Fairytale Finish. This box had the theme of "baked goods" so the two polishes are inspired by that! There was also a fun little mani bomb included that was lemon cake scented and it smelled so good I wanted to eat it (I did not, though, don't worry!).

First up we have Triple Berry Tart, which is a hot pink crelly with a mix of blue and white glitters and a fine shimmer to it. It applied pretty well, though I did feel like the glitters were a little more sparse when I applied it (though it doesn't look like it in my pictures, so I think I'm just a little crazy). I mostly applied this like I would a non-glitter polish, though I done a little bit of dabbing to make sure the glitters were where I wanted them. I used three coats here, just to make sure I want the coverage I wanted. I probably could have gotten away with two! 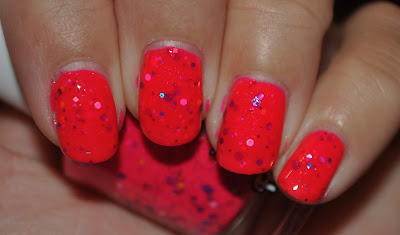 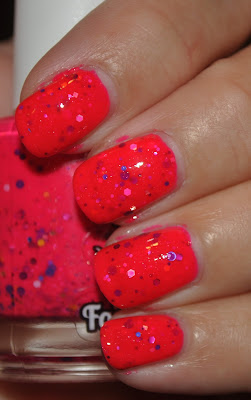 For some reason, this photographed a lot brighter and more red/orange than pink. You can clearly see that the bottle has a much pinker base, and that is what it looks like in life.

Next up we have Choc Full of Holo, which, if you can't from the name, is a chocolate holographic! It's a cooler leaning brown, and really gorgeous. The holo is linear, but not particularly strong. It does give it a really nice sparkle, though! I wore this polish for several days, though I felt like I needed to wait until fall to do so because brown just does not read summer to me. Sorry, brown, but it's true. It looked great and held up really well. 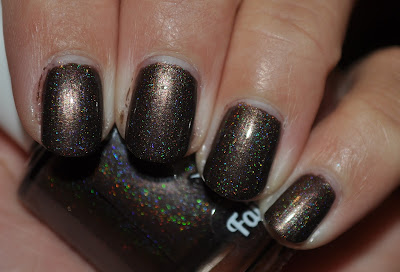 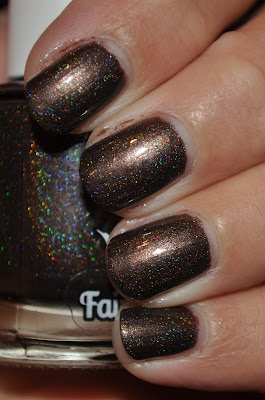 Another great box from Amanda and Fairytale Finish! As per usual the polishes were awesome, and the packaging was great (though I never manage to get a picture of it). I have really been enjoying this subscription box! Hopefully I'll get a review of September's box up soon, though we'll see if that actually happens! Will I catch up? Tune in to find out!
Posted by Cat Ray at 8:00 AM