Time for another Seahawks Sunday post! Once again, they played this past Friday and once again, we lost. What gives, guys? Anyway... there's always next week! This week we played the Kansas City Chiefs, which always brings back memories for me. 10 years ago this August, a very close friend and his wife were killed in a horrific car crash while driving through Wyoming. He was the youth director for my church (in fact, several churches in the area) and they were great mentors and support during those tumultuous teen years.They were from Kansas and accordingly, their favorite football team was Kansas City. One of the most memorable moments I have of him is from the second to last Seahawks game in the Kingdome, where they played the Kansas City Chiefs. I was a junior in high school, and my band had been invited to do the halftime show, which happened to be the day after Christmas. My friend showed up in a Santa Claus outfit, shirtless, to cheer on his team. All my schoolmates couldn't believe I knew a crazy, shirtless guy in a Santa outfit but it is a memory that makes me smile-- his enthusiasm was always infectious and I still miss him even after ten years. So I'm sad the Seahawks lost, but I also know my friend is smiling somewhere.

Let's get on to the polish! This week I broke out another Fairytale Finish polish, Can't Stop Won't Stop. This is a crelly glitter with a grey base and blue and neon green glitters in different sizes. The first coat went on very sheer. So sheer that I was a little worried it wouldn't build up. Luckily, I didn't have to worry too much! With the second coat, I had pretty good coverage and I added a third coat just to make sure it was completely opaque. That was all I needed! It dried down quickly and had a slightly textured finish, as glitters tend to-- so you definitely need a top coat to smooth it out. But otherwise, absolutely no complaints (aside from being slightly worried about the first coat)! This polish just needs a first coat to cling to, though I also used slightly thicker coats given my large nail beds. The glitter distribution is good and I didn't have any issues there. 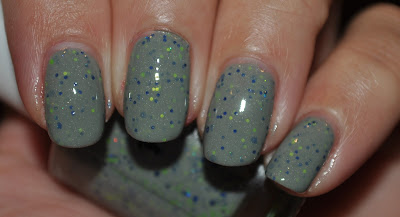 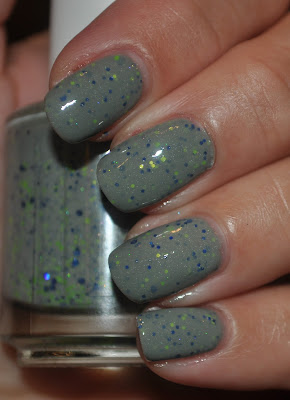 I really like this! The Seahawks have used grey as a part of their uniform scheme in the past, which I don't necessarily love, but I think this works and captures it perfectly! So far I have yet to be disappointed by a Fairytale Finish polish, so I really need to get my hands on this year's Seahawk's duo! Hope everyone is having a good weekend!
Posted by Cat Ray at 8:00 AM