Time for a new feature! As of this past last week, the NFL preseason has kicked off so football season is upon us! Technically the Seahawks played Friday (and lost, womp womp) but I've picked up some Seahawks polishes in the past year so I thought it would be fun to showcase some of them on a weekly (or something) basis. At least, it makes sense to me as a football fan! Plus, the college season hasn't started yet so that gives me a little more incentive. The first Seahawks themed polish I have to share with you is from a local maker, Fairytale Finish! This is Beast Mode, inspired by powerhouse running back Marshawn Lynch. I actually used this in my Super Bowl manicure this past year.

Beast Mode has a deep teal jelly base with some shimmer and then different sized neon green matte glitter. In my Super Bowl Manicure I actually layered Beast Mode over LVX Azzurum but for this mani I just wore it alone. Given the fact that this is a jelly, having a base color does change it a little bit, but I like it both ways! Here I used three coats of Beast Mode over the Sally Hansen Glitter Off base coat. Because this had been sitting for awhile in my Alex unit, the first coat was a little glitter sparse, but it got much better after I rolled it around and turned it upside down. I didn't have to do a lot of fishing! The first coat was a little sheer and even at three coats there is a little hint of visible nail line, but it's not bad in real life. Layering over a dark blue or teal base would definitely deepen the teal hue and make the glitters pop even more. 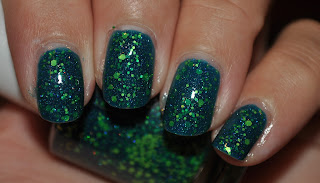 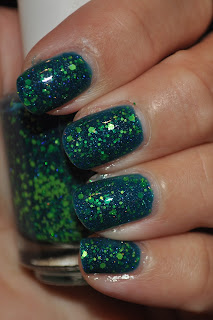 Too bad the Seahawks lost on Friday, but Beast Mode is an awesome polish, isn't it?! In fact, it's cool whether or not you are a Hawks fan-- I love the neon green glitter in the teal base. It's a really fun combo. Unfortunately, Beast Mode isn't available any longer, but there is another duo of Seahawks inspired polishes available from Fairytale Finish, in addition to a Sounders (our local MLS team) duo.
Posted by Cat Ray at 3:41 PM