All That Glitters Go Away

Tonight I have a Valentine's Day polish for you from All That Glitters, an indie polish maker! This is a polish from her Limited Edition Bitter Hearts collection, which is based on those boxes of conversation hearts you got for Valentine's Day as a child-- and that tasted like chalk! Anyway, when the collection was posted online, I immediately liked a lot of the polishes, but only grabbed three. Go Away is the first polish I have to share with you. Go Away is described as a "pretty peachy pink coral creme base that is loaded with gold shimmery flakes and complimenting round glitters." Round glitters are becoming big right now, so of course I snatched this one up right away!

I decided to layer Go Away over Urban Outfitters Orange 7 (will post that later). The base of Go Away is definitely more pink than peach, but the base I used makes it lean a little more peachy. In any case, though, you don't actually need a base color to wear this, as it's fairly opaque on its own in three coats. The formula is a little on the thick side, but generally easy to work with and move the glitters around. 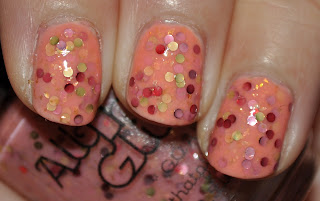 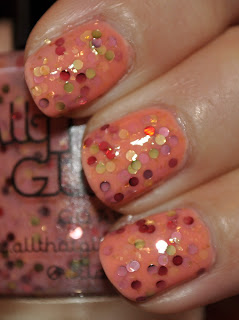 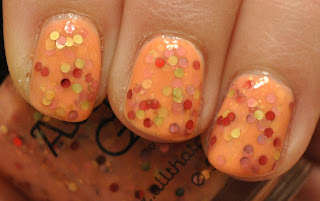 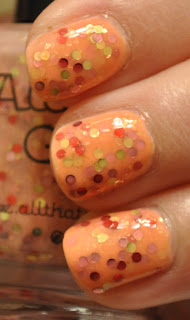 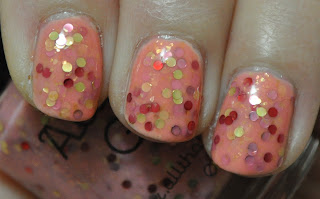 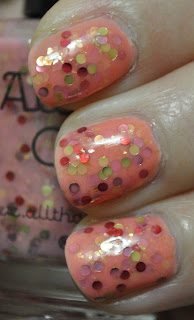 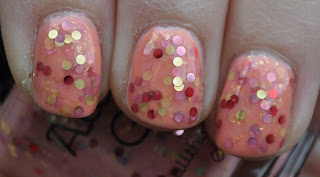 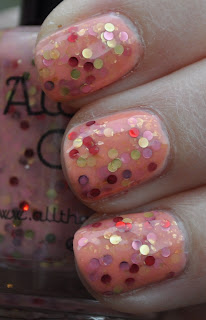 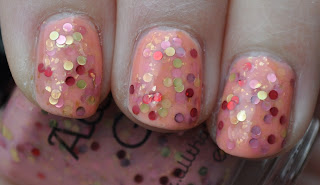 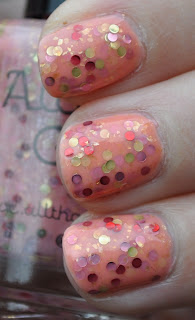 I love the color combo of this polish! The small gold flakies are a nice touch too. I also really like that this polish isn't necessarily "Valentine" themed and could definitely be worn throughout the year.
All That Glitters polishes can be found on her etsy store and retail for $8 each.
Posted by Cat Ray at 9:21 PM