Coral Fever is one of the polishes from the Tracy Reese for Sally Hansen Spring 2011 Collection. You saw this briefly in an earlier post, but since summer is such a fantastic time for corals, there was no I could let this languish in one of my polish drawers. Coral Fever is pink leaning coral. Or so I thought. This color is actually very hard to describe and capture-- maybe because it's basically balanced so well between orange and pink. I originally saw a review of Coral Fever over at All Lacquered Up and loved it-- it looked a little more pink and was super bright. Fast forward to breaking into my own bottle, and my version of Coral Fever looks a lot more orange. I was a little disappointed because I was expecting it be slightly more pink. However, despite my initial disappointment, it's still a great shade of coral.

My only other complaint is about the formula. Prior to this, I had only tried Sally Hansen's Gray by Gray, which had a really nice formula and I loved the wide brush, which is great for my wide nail beds. However, I felt very frustrated by the formula of Coral Fever. It seemed thick and I had trouble getting it to even out. I got away with three coats in the end and it looks ok, but I remember feeling very frustrated at the end of my manicure. 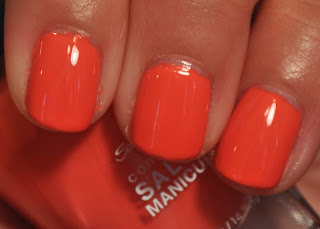 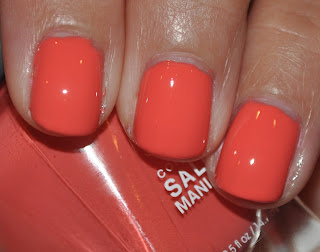 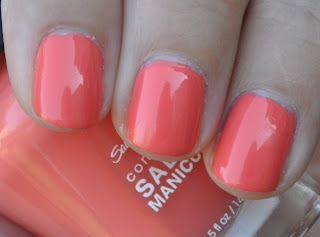 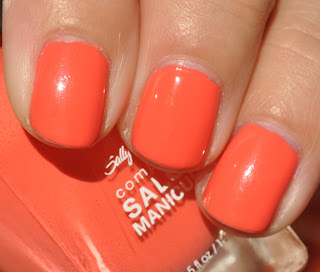 As you can see, the color changes depending on the light. Sometimes it looks more pink (or even reddish) and other times more orange.
Posted by Cat Ray at 8:25 PM