Essie Aim to Misbehave has been making the rounds for awhile now, but it finally showed up in Seattle area drug stores in last couple of months so I snagged my bottle back in August (even though I believe this came out in the spring). Aim to Misbehave is kind of a big deal because it's Essie's 1000th shade! That seems like a pretty big deal, and so they made a special polish to celebrate! (OPI's 1000th shade had to be a red, amiright?! At least, I'm assuming OPI has hit 1000, right?) And not only that, but they made it a yellow! That seems so unusual for Essie but I freaking love it! Not everyone is a yellow fan, but I love yellow so I think it's awesome. Aim to Misbehave is a bright egg yolk yellow with a glass fleck type shimmer.

Aim to Misbehave had a pretty decent formula, I'm pleased to report! It went on smoothly and the first was a little sheer, but it builds up nicely. I probably could have gotten away with two coats if I had wanted to; I ended up using a thicker third coat to eliminate any potential streaks (and I would recommend using a light touch to avoid streaks). I did get some bubbles but I think it might be due to my crappy top coat and not the polish, though possible my last coat was too thick and I should have waited longer... hard to say. 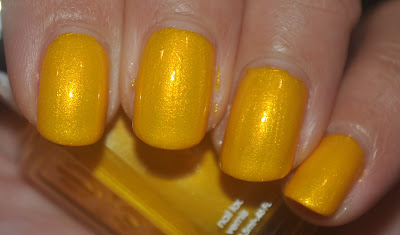 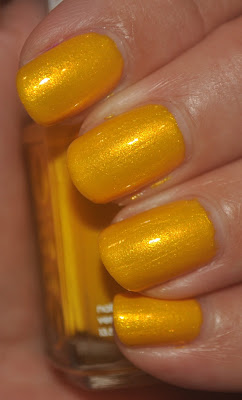 Sadly while I love this color in the bottle, I'm not really sure it does anything for me...? Ugh, I don't know! I love how bright and cheerful this is, and I love the shimmer but something just isn't clicking with this. I don't think it works with my skin tone very well; I might need to try this in January when my fingers are pasty pale again. I'm not ready to give up on this, but I don't know how often I'll be reaching for it. Frustrating, but not unheard of, sadly!
Posted by Cat Ray at 6:00 AM